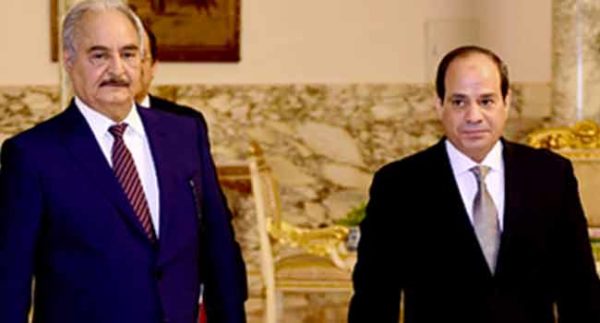 Egypt’s President Abdel Fattah al-Sisi on Sunday met in Cairo with Khalifa Haftar, the commander of eastern-based Libyan forces, who is under international pressure to halt an advance on the capital Tripoli.

Egypt has close ties with Haftar, whose Libyan National Army (LNA) controls the east and swept through the mainly desert south earlier this year before moving to Tripoli ten days ago in a major escalation of conflict.

His move is the latest in a cycle of conflict and anarchy since the 2011 toppling of former dictator Muammar Gaddafi.

Haftar has projected himself as the scourge of Islamist militants and of the militias that grew powerful after the uprising. His rivals say he has fueled conflict and risks returning Libya to authoritarian rule.

Egypt and the United Arab Emirates publicly support U.N.-led peace efforts in Libya, while being seen as Haftar’s closest regional allies. Sisi, a former army chief, has led a far-reaching crackdown on Islamists with Egypt and has blamed Libya-based militants for some cross-border attacks.

A statement from Sisi’s office did not mention Haftar’s offensive directly but “confirmed Egypt’s support for efforts to combat terrorism and extremist groups and militias in order to achieve security and stability for the Libyan citizen”.

The presidency released photos showing Haftar, dressed in a blue suit, sitting with Sisi and his head of intelligence Abbas Kamel.

Haftar, a former general in Gaddafi’s army who later turned against him, had long talked of a move on Tripoli, in Libya’s west, where an internationally-recognized government sits.

His campaign has disrupted efforts by the United Nations to bring rival eastern and western administrations to the negotiating table to plan an election and end the turmoil.

“Our position will not change,” U.N. envoy Ghassan Salame tweeted. “You’ve learned and tasted war. No matter how obstinate one becomes, there is no solution except a political one.”

The fighting has killed 121 people, mainly fighters, and wounded another 561, according to U.N. tallies. Some 13,600 people have fled their homes.

Fighting in recent days has been taking place on the outskirts of Tripoli as LNA forces have been bogged down by groups aligned with the Government of National Accord (GNA).

The front lines were mostly calm on Sunday morning but military sources said in the afternoon that an eastern Libyan warplane crashed in southern Tripoli. No further details were available.

The 75-year-old Haftar’s push for Tripoli took many by surprise and has brought calls from round the world for a ceasefire. By moving forces west, his eastern home base is exposed and it may be hard for Haftar to retreat without losing standing among friends and foes alike.

While some pro-Haftar media had predicted a quick victory, Tripoli government forces have halted him about 11 km (7 miles) from the center near an airport that was largely destroyed in a previous bout of fighting five years ago.

His lightning drive appears to have united diverse factions in western Libya in the defense of Tripoli.