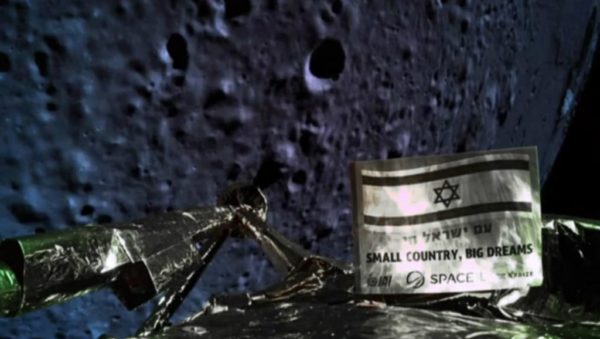 Israel Aerospace Industries / AFP | A picture taken by the camera of the Israeli Beresheet spacecraft of the moons surface before it crashed.
Share:

Israel’s attempt at a moon landing failed at the last minute Thursday when the craft suffered an engine failure as it prepared to land and apparently crashed onto the lunar surface.

“We didn’t make it, but we definitely tried,” project originator and major backer Morris Kahn said in a live videocast from mission control near Tel Aviv.

“I think that the achievement of getting to where we got is really tremendous, I think we can be proud,” he said.

During the broadcast control, staff could be heard saying that engines meant to slow the craft’s descent and allow a soft landing had failed and contact with it had been lost.

“If at first you don’t succeed, you try again,” said Prime Minister Benjamin Netanyahu from the control room, where he had been watching along with US Ambassador to Israel David Friedman.

Khan, a philanthropist and chairman of SpaceIL, put up $40 million of the project’s $100 million budget.

Other partners who joined later are from “the private sector, government and academia,” according to the IAI website.

Just before the landing attempt Netanyahu said that he was thinking about initiating a national space project.

“I am seriously considering investing in a space programme,” he said in the webcast.