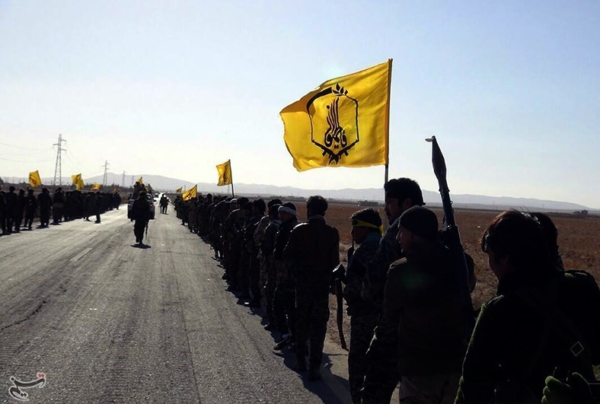 Afghanistan  security officials worry that Iranian-backed Afghan veterans of the war in Syria will one day become a secret army for Tehran in Afghanistan itself, particularly after a U.S. withdrawal. Iran paid, trained and armed thousands of Afghan Shiites to fight in Syria to defend its ally, President Bashar Assad. Returning home as Syria’s war winds down, they face suspicion and fear. Iran has already established its own armies in several Middle eastern countries like Hezbollah in Lebanon, Hezbollah in Iraq and the Houthis in Yemen.

HERAT, Afghanistan  — Too poor to even buy pens and notebooks for school, Mehdi left his home in Afghanistan soon after his 17th birthday and headed to Iran, hoping to make his way to Europe and find work.

Instead, Mehdi ended up fighting in Syria’s civil war, a conflict he had nothing to do with, 2,000 kilometers (1,200 miles) from home. He was one of tens of thousands of Afghans recruited, paid and trained by Iran to fight in support of Tehran’s ally, Syrian President Bashar Assad.

There, he found himself thrown into one of the war’s bloodiest front lines, surrounded by the bodies of his comrades, under fire from Islamic militants so close he could hear their shouts of “Allahu akbar” (“God is greatest”) before each mortar blast.

Iran ran an extensive drive to bring Shiites from across the region and create a network of militias to help save Assad from the uprising against his rule — not only Afghans but also Pakistanis, Iraqis and Lebanese. Now with the 8-year war in Syria winding down, the question is what will Tehran do with those well-trained, well-armed forces.

Mehdi and other soldiers-for-hire from Afghanistan’s impoverished Shiite Muslim communities are returning to their homeland, where they are met with suspicion. Afghan security officials believe Iran is still organizing them, this time as a secret army to spread Tehran’s influence amid Afghanistan’s unending conflicts.

“Here in Afghanistan we are afraid. They say we are all terrorists,” said Mehdi, now 21 and back in his home city of Herat. He spoke on condition he not be fully identified for fear of retaliation. He wouldn’t meet The Associated Press at home or in public — only in a car parked in a remote, mostly Shiite neighborhood. Even there, Mehdi kept his face obscured with a scarf, glancing suspiciously at every passing car.

Afghan veterans returning from Syria are threatened from multiple sides. They face arrest by security agencies that view them as traitors. And they face violence from the brutal Islamic State affiliate in Afghanistan, which views Shiites as heretics and vows to kill them. Last May, IS gunmen burst into Herat’s Jawadia Shiite mosque, opening fire and setting off their suicide belt explosives among worshippers, killing 38 people.

Just knowing people who fought in Syria can land someone in jail, said a local elder in a village near Herat. He spoke on condition of anonymity for that reason. Eight men from his village were killed fighting in Syria, but there are no graves for them here. All were buried in Iran, he said.

Iran intensified its role in Syria when Assad appeared to be losing the fight against rebels in 2013 and 2014. Tehran sent hundreds of Revolutionary Guard troops and began bringing in allied militias. The most well-known and most powerful was Lebanon’s Hezbollah.

But the largest was the force made up of Afghans, known as the Fatimiyoun Brigade, which experts have estimated numbered up to 15,000 fighters at any one time.

Over the years, tens of thousands of Afghans likely trained and fought in it. Most of them are from Afghanistan’s ethnic Hazara minority, who are among the country’s poorest.

Roughly 10,000 veterans of the brigade have returned to Afghanistan, says a senior official in Afghanistan’s Interior Ministry who is familiar with government intelligence. The official was not authorized to brief reporters and so spoke on condition of anonymity.

The Afghan government and many experts believe Iran could mobilize these ex-fighters once more to assert its influence in Afghanistan, particularly as the United States accelerates its efforts to end its nearly 18-year military intervention.

“Expect the Iranians to reconstitute their militias inside Afghanistan at some point,” warned Bill Roggio, editor of the Long War Journal, a site devoted to coverage of the U.S. war on terror. “Iran does not discard assets in which it invests time, treasure and expertise.”

Afghanistan is already tormented by an overabundance of armed groups, many divided on ethnic lines. They include militias loyal to several warlords, who are aligned with the government but often at odds with each other. There are also the Sunni militants: Taliban insurgents rule in nearly half the country, and the Islamic State affiliate has proven to be a stubborn enemy, even in the face of relentless U.S. bombing raids.

All those factions could turn their massive arsenals on each other after a U.S. and NATO withdrawal. It has happened before. In the early 1990s, factions of the U.S.-backed mujahedeen who took power after the Soviet withdrawal turned on each other in fighting that leveled large parts of the capital, Kabul, and killed an estimated 50,000 people.

Iran will likely seize on any turmoil to mobilize the Fatimiyoun with the very real pretext that Afghan Shiites need a defender, said Michael Kugelman, Asia Program deputy director at the Washington-based Wilson Center.

If Afghanistan is plunged into more unrest, “the Iranians would have a strong motivation to help a Shia force that would face intensified threats from the Taliban and especially ISIS,” he said, using an alternate abbreviation for the Islamic State group.

Iran is already supporting Syria war veterans living in Kabul and in central Afghanistan’s Hazara-dominated region of Bamiyan, said the Interior Ministry official. He said Afghan intelligence agencies have identified senior Iranian government officials who are “managing the activities” of returning fighters, including providing them arms and money and building a structure for quick re-mobilization if needed. Afghan warlord Abdul Gani Alipur, an ethnic Hazara, is also implicated in aiding Iran, he said. Alipur was arrested late last year on charges of having an illegal militia, but he was released after thousands of Hazaras protested.

Most of those who joined the Fatimiyoun Brigade were driven by hopelessness and poverty, not loyalty to Iran, said Reza Kasimi, a researcher with the independent Kabul-based research group, Afghanistan Analysts Network.

“The first thing is that most of these people don’t see a future for themselves in Afghanistan,” he said.

When Mehdi went to Iran in 2015, he worked, mostly on construction sites, to earn enough money to make a run for Europe. But by the time he did, Europe’s borders had closed.

“I was very disappointed. I had come to Iran to go to Europe, to study, to have a better life, but I was still there, with nothing,” Mehdi said.

An Afghan friend suggested they enlist for Syria. As a fighter for Iran, they could earn the equivalent of $900 a month. At the time Mehdi was making barely $150 a month.

“I thought about it and I made my heart strong, like a raging river,” Mehdi said. “I decided, ‘Live or die, I’ll go.'”

They reported to a recruitment center in Tehran. There, officials gathered his personal details — the names of his parents and relatives and the street where he lived in Herat. “I understood they wanted all that information if I died,” he said.

He and other Afghan recruits were flown the next day to Iran’s southern Yazd province, where they underwent 27 days of training under the Revolutionary Guard. Mehdi’s marksmanship impressed the trainers, and he was made a sniper. When it was over, Mehdi was flown to Damascus with around 1,600 other new recruits.

In Damascus, the recruits opened bank accounts where their salary would be deposited. They were taken to the shrine of Sayeda Zeinab, a site outside Damascus revered by Shiites, for final blessings before battle. The next day, they were taken by bus to the northern city of Aleppo and sent immediately to the front.

There, Mehdi was thrown into one of the fiercest battles of the war — a campaign that began in the spring of 2016 against Islamic militant factions, including the al-Qaida-linked Nusra Front, over the town of Khan Toman and nearby villages on Aleppo’s edge.

It was a fight that showed the international nature of the war. Among the militants were Syrians, Iraqis, Chechens, Turkmens, Uzbeks and other foreign jihadis; on the other side were Syrian government troops, Iranian soldiers, Lebanese Hezbollah fighters, Iraqi Shiites and Afghans, backed by Russian warplanes — all battling for a piece of Syrian land.

The fighting went on for months and it is estimated hundreds on both sides were killed or wounded. On a single day, militants killed an estimated 80 pro-government fighters, including at least 13 Iranians and dozens of Afghans, Iraqis and Lebanese. In the end, the militants held Khan Toman, as they do to this day.

Mehdi described terrifying bloodshed. He said in one battle, 800 Afghans were sent to the front line and only 200 returned alive and unwounded. “Often in the morning I saw seven, eight dead bodies.” he said. “For the first couple of days I was very scared. The explosions were so loud.”

Another Afghan veteran of the same battle, Abdullah, said he still has nightmares of the dead, their limbs missing. He said the Afghans were sent as cannon fodder. “I saw Afghan fighters rolled over by tanks the way someone steps on ants,” he told the AP in Kabul. “Dead bodies were scattered everywhere.”

Mehdi returned to Afghanistan a year ago, and his life has changed little from when he left. He remains poor and unable to find a job.

After nearly 18 years and more than $1 trillion spent by the United States, Afghans are only getting poorer. According to a 2016-17 Afghanistan Living Conditions Survey, co-sponsored by the European Union, 55 percent of Afghans live below the poverty level, compared to 38 percent in 2011-12.

Mehdi spoke bitterly of his lack of options. He’s considering re-enlisting for Syria. The brigade is still operating there, and some Afghan veterans stayed in Syria to find jobs, mostly in construction.

“I don’t know what my future brings,” he said. “Maybe I become a thief or maybe I go back to Syria.”