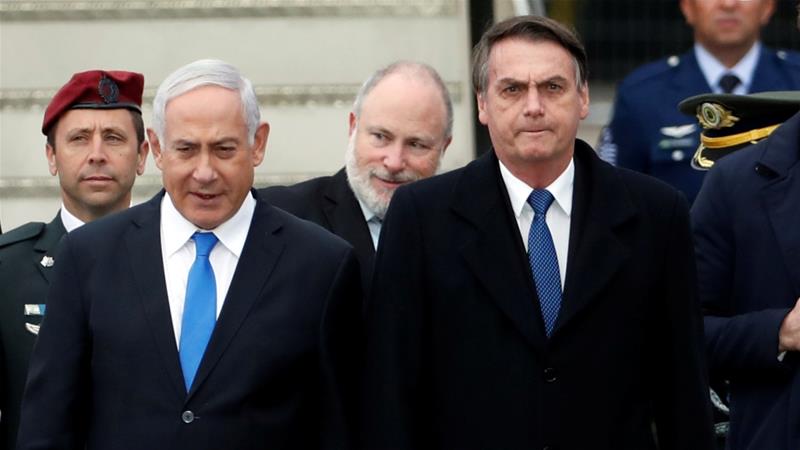 Brazilian President Jair Bolsonaro will apparently not move his country’s embassy from Tel Aviv to Jerusalem. Instead, he announced the opening of a “business office” in West Jerusalem, during his  two-day visit to Israel.

In January, Bolsonaro promised to follow in the footsteps of United States President Donald Trump in relocating the embassy from Tel Aviv to Jerusalem.

The move would have been a sharp shift in Brazil’s foreign policy, which has constantly backed a two-state solution to the Israeli-Palestinian conflict.

However, Bolsonaro and other Brazilian officials recently appeared to have backtracked on the embassy promise, saying the issue “continues to be under consideration,” and would instead open a “business office” in Jerusalem.

Ibrahim Alzeben, Palestinian envoy to Brazil, stated that Palestinian leaders and officials strongly condemned the possible move, which would be considered as an “attack” on Palestinian people and in violation of international law.

The decision to move the embassy is highly controversial due to the fact that Israel wants claim of Jerusalem City as its capital, while the Palestinians view East Jerusalem as the capital of their future state.

Up until now, the US and Guatemala are the only two countries that have transferred their embassies to Jerusalem.

It is noteworthy that the Palestinian Authority (PA) has been boycotting the US administration since December of 2017, when US President Donald Trump recognized Jerusalem as Israel’s capital and, then, moved the US embassy from Tel Aviv to Jerusalem, in May 2018.

Following recent tensions and the US Trump administration’s undeniable support for Israel has prompted the Palestinians to cut communication with the US, and to declare it unfit to be a mediator during the Israeli-Palestinian peace process.

In addition, a few countries such as the Czech Republic, Slovakia, and Hungary, have opened or announced plans to open trade and cultural centers in Jerusalem.

Bolsonaro’s backtracking on he embassy move was viewed as a  huge blow  and embarrassment
for Israeli  PM Netanyahu  who was counting on it to help him  in  the upcoming elections.

The four-day visit by the far-right leader comes a week before Israel’s closely contested election in which the right-wing Prime Minister   Netanyahu is battling a popular centrist candidate and corruption allegations, which he denies.