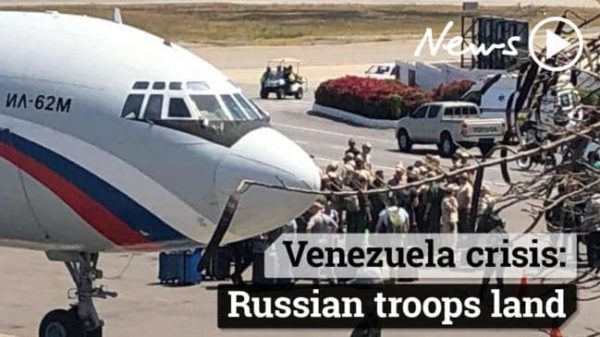 The US and Russia clashed publicly over Venezuela on Monday, raising geopolitical stakes over the oil-producing nation after Moscow sent dozens of soldiers to Caracas amid what it alleged was a budding “coup.”

US Secretary of State Mike Pompeo warned his counterpart Sergei Lavrov over the phone that “the United States and regional countries will not stand idly by as Russia exacerbates tensions in Venezuela.”

The tense conversation came after Russia sent two planes reportedly carrying around 100 soldiers and 35 tons of military equipment to Venezuela’s main airport outside Caracas on Saturday.

Although Russian state news agency Sputnik described the troop arrival as a movement to “fulfill technical military contracts,” the development unsettled Washington, which has thrown its weight behind opposition leader Juan Guaido as interim president against President Nicolas Maduro.

“The continued insertion of Russian military personnel to support the illegitimate regime of Nicolas Maduro in Venezuela risks prolonging the suffering of the Venezuelan people who overwhelmingly support interim President Juan Guaido,” Pompeo said, according to his office.

Lavrov said in a statement he had complained of “attempts by Washington to organise a coup d’etat in Venezuela” during his conversation with Pompeo.

Such moves “constitute violations of the UN charter and undisguised interference in the internal affairs of a sovereign state,” it said.

Russia and China are the main allies of Venezuela. Both have lent billions of dollars to the oil-rich South American country, propping up Maduro’s cash-strapped government.

Russia previously signaled its support for Maduro by sending two Tu-160 bombers to Venezuela last December to take part in a military exercise.

Russia’s President Vladimir Putin has a record of ordering his military — or paramilitary — forces into several theaters to challenge US strategies, notably in Syria and Ukraine.

US moves against Caracas have ratcheted up in recent weeks, with President Donald Trump warning that “all options” — implicitly including US military intervention — were being considered.

Maduro on Saturday accused Washington of using frozen Venezuelan funds to bankroll a plot to assassinate him.

“We have dismantled a plan organized personally by the diabolical puppet to kill me,” Maduro told thousands of supporters in Caracas, referring to Guaido.

His government gave details of the alleged plot on state television, with Information Minister Jorge Rodriguez saying “hitmen” from El Salvador, Guatemala and Honduras had been recruited “using big sums of money” and sent to Colombia ahead of missions into Venezuela to carry out “targeted assassinations” and “sabotage.”

Rodriguez accused Guaido’s chief of staff, Roberto Marrero, of receiving money from the United States and being a key organizer of the alleged operation.

Marrero, a 49-year-old lawyer, was arrested on Thursday in his Caracas home, triggering an outcry and demands that he be immediately released by the US, the European Union and major Latin American countries that recognize Guaido as Venezuela’s interim president.

Rodriguez played recordings he said were from WhatsApp conversations between Marrero and Guaido in which he said they discussed using Venezuelan funds blocked by US sanctions to finance armed groups with the support of Colombian President Ivan Duque.

The accusations were repeated shortly afterward by Maduro as he addressed a crowd of thousands of supporters in the capital.

According to his government, the United States has seized $30 billion is Venezuelan assets, including money in bank accounts.