Pelosi says Trump ‘unfit’ to be president, but not worth impeaching’ 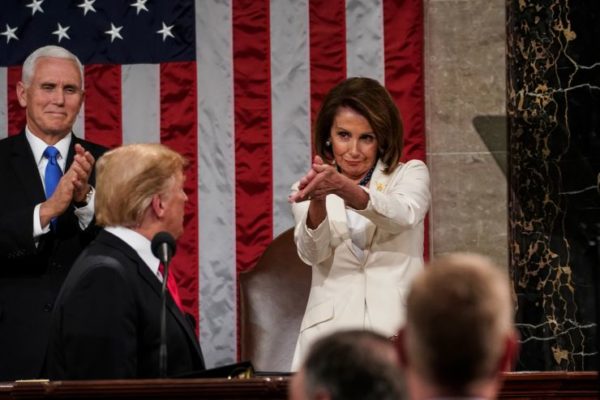 House Speaker Nancy Pelosi says President Donald Trump is ethically and intellectually unfit ” to be president, but also says “I’m not for impeachment. ”

Pelosi, D-Calif., in a new interview said that Trump is “just not worth” the divisiveness that the country would suffer from seeking to impeach him.

Her view contrasts with that of some of her fellow Democrats, who believe their party should use its new-found majority in the House to impeach the president.

“This is news. I’m going to give you some news right now because I haven’t said this to any press person before. But since you asked, and I’ve been thinking about this: Impeachment is so divisive to the country that unless there’s something so compelling and overwhelming and bipartisan, I don’t think we should go down that path, because it divides the country.”

“And he’s just not worth it,” Pelosi said.

When a Post reporter asked her if Trump was “fit to be president,” Pelosi said, ”Are we talking ethically? Intellectually? Politically? What are we talking here? ”

White House Press Secretary Sarah Huckabee Sanders, when asked about Pelosi’s comments, told NBC News that ″impeachment should never be on the table because the president is doing a great job. ”

Sanders also said about Pelosi calling Trump unfit for the presidency, ″Most of America disagrees with her comments, that’s why they voted him into office.″⁣

In fact, Trump lost the popular vote to Hillary Clinton in the 2016 presidential election by nearly 3 million votes.

Pelosi and another top Democrat in the House tried to cool down talk about impeaching Trump in January, on the heels of a public comment by Rep. Rashida Tlaib, D-Mich., who promised to “impeach motherf—–.”

On Jan. 6, Pelosi told CBS News’s show “Sunday Morning” that, “If and when the time comes for impeachment … it will have to be something that has such a crescendo in a bipartisan way. ”

Even if House Democrats could must a majority to impeach Trump, removing the president from office would be extremely difficult given current Republican control of the Senate. For a president to be removed from office, two-thirds of the Senate’s membership must vote for it.

Also on Jan. 6, House Majority Leader Steny Hoyer, D-Md., told NBC News’s “Meet the Press” that, “I don’t think an impeachment process is inevitable, and that’s not what we’re focused on.”

In an interview published Feb. 27 by Rolling Stone magazine, Pelosi said called impeachment “a very disruptive process to put the country through and it’s an opportunity cost in terms of time and resources. ”

“You don’t want to go down that path unless it is unavoidable,” she said.