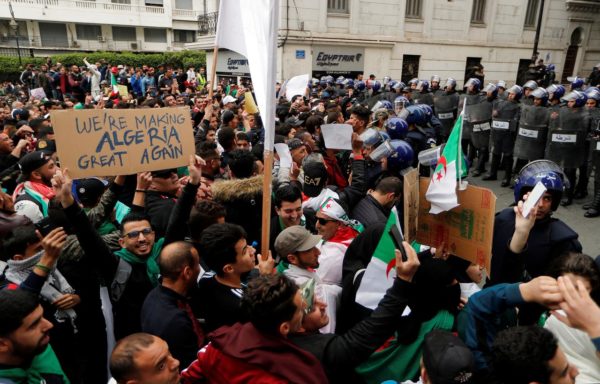 Tens of thousands of Algerians packed central Algiers to capacity on Friday to challenge President Abdelaziz Bouteflika’s 20-year-old rule in the biggest protests in the capital in 28 years.
Share:

Tens of thousands of Algerians packed central Algiers to capacity on Friday to challenge President Abdelaziz Bouteflika’s 20-year-old rule in the biggest protests in the capital in 28 years.

The demonstrations, the latest in two weeks of rallies across the country against the veteran leader, were mostly peaceful, but police in the evening stepped up their use of tear gas to block the road to the presidential palace. They also used it in several other areas of the capital.

Security forces detained 195 people, state television said, citing offences such as looting. It added 112 policemen had been injured. Unidentified people broke into a primary school and the nearby national museum, stealing some ancient items and burning parts of the building, state TV and Ennahar TV said.

Algerians desperate for jobs and angry at unemployment, corruption and an elderly elite seen as out of touch with the young have taken to the streets since Feb. 22 to protest against the 82-year-old’s plans to remain in office.

“Bouteflika, go!” read one banner. “Algeria is a republic, not a kingdom”, “No elections until the gangs are brought down”, said others.

The demonstrations, the largest since 1991 when the army canceled elections Islamists were poised to win, pose the most substantial threat ever faced by the president, who is standing for re-election on April 18.

Underscoring frustrations with the entire Algerian political system, protesters put signs on the heads of donkeys with the names of ruling party figures and a member of the opposition.

There were no official estimates of the size of the crowds. But Algiers’ El Watan newspaper estimated more than a million Algerians demonstrated in the capital.

In its latest edition, quoted by the state news agency, the army magazine described the relationship between the country’s powerful military and Algerians in positive terms.

“Both belong to one country, no alternative to it,” said Djeich magazine. Both the people and the army had the same vision and destiny, it said. It did not mention the unrest but the army chief of staff has said the military would not tolerate any threats to the stability of the country.

Unusually, one of the most popular imams, or prayer leaders, in Algiers did not pray for the president as he does every Friday, and only wished the best for Algeria and its people.

In another change, state news agency APS said protesters had demanded “regime change”. The agency said in previous coverage of the event that the protesters wanted “political change”. Its news service ignored the first few days of protests entirely.

By the evening most protesters had gone home, leaving the field to youths clashing with police as they tried to approach the presidential palace.

Several lawmakers of the ruling FLN party have resigned to join the mass anti-government protests, a source said. No details were immediately available.

Train and metro services in Algiers were suspended without explanation before Algerians gathered in the capital and several other cities including Constantine, Annaba, Skikda, Bouira and Tizi Ouzou to press the 82-year-old Bouteflika to step down.

The ailing Bouteflika is in hospital in Geneva and has rarely been seen in public since suffering a stroke in 2013.

On Thursday he issued his first warning to protesters, saying the unrest, now entering its third week, could create chaos in North African country, an oil and gas producer.

His candidacy has angered many Algerians tired of the dominance of elderly veterans of the 1954-1962 war of independence against France.

Bouteflika has offered to limit his term after the election — and even to change the “system” that runs the country — but people from different classes of society, including students and young families, are still on the street.

Some long-time allies of Bouteflika, including members of the ruling party, have expressed support for the protesters, revealing cracks within a ruling elite long seen as invincible.

Older Algerians with dark memories of a civil war in the 1990s have tolerated crackdowns on dissent in exchange for stability, and Bouteflika avoided the kind of uprising that toppled Arab leaders in 2011 because the state had enough foreign reserves to boost state spending.

But the young want jobs and are tired of what they perceive as widespread corruption. More than a quarter of Algerians under 30 are unemployed.

Algerians have been urged to stage a “March of 20 Million” on Friday by an anonymous party on social media.

Riot police have been deployed in growing numbers in recent days, but the military has so far stayed in its barracks.

“Today will be a decisive day,” said Mohamed, a teacher in Algiers.