Venezuelans find meals in garbage bins: “If it smells good,I take it home,”says a security guard 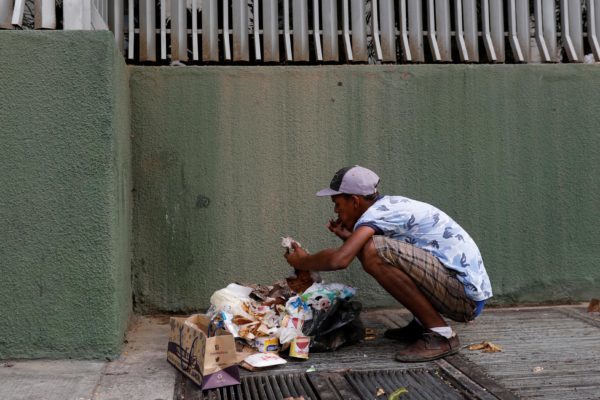 “I smell it and if it smells good, then I take it home,” said Tony, who declined to disclose his last name because he does not want his wife and four children to know how he has been putting food on their table for more than a year.
Share:

Tony, a 36-year old security guard, rummages through the garbage bins of a wealthy district in Caracas on his days off work, scavenging for food as Venezuela’s economic meltdown has left even the employed struggling to find enough to eat.

“I smell it and if it smells good, then I take it home,” said Tony, who declined to disclose his last name because he does not want his wife and four children to know how he has been putting food on their table for more than a year.

He said he typically finds scraps of meat, cheese and pieces of vegetables on his garbage runs. “I wash it with vinegar, a lot of water, and I add onion and sauce.

Scenes of Venezuelans picking through garbage in a search for something to eat has for years been a symbol of the nation’s economic meltdown, which has been marked by widespread shortages of food and medicine as well as hyperinflation.

Maduro, who has been in power since 2013 and was re-elected last year in a vote widely viewed as fraudulent, has previously dismissed journalists’ questions about garbage consumption, saying they were part of a U.S.-backed propaganda campaign against his government.

He denies there is a humanitarian crisis in his country and says foreign governments are seeking to undermine him.

Venezuela’s Information Ministry did not immediately reply to a request for comment.

It is not uncommon for poor and indigent residents of the world’s wealthiest nations to root through dumpsters. But it is rare in those nations for people with full-time jobs to rely on garbage to sustain their families.

Prices in Venezuela are rising more than 2 million percent per year, and the country’s minimum wage, worth around $6 per month, buys little more than a tray of eggs.

Many Venezuelans rely on remittances from relatives who have joined an exodus of an estimated 3.4 million people since 2015, according to the United Nations, while others depend on government food handouts.

Opposition leader Juan Guaido, who in January declared himself to be Venezuela’s interim president, led an effort last week to bring humanitarian aid into the country, but troops blocked trucks from getting in.

Most Western nations including the United States have recognized Guaido as Venezuela’s legitimate president.

“I’ve had to teach my children to eat everything,” said Estefani Quintero, 35, a mother of seven who travels two hours to Caracas from a distant suburb to trawl garbage bags. “Of course it’s the government that’s at fault for this. We used to eat breakfast lunch and dinner, we even threw away food.”