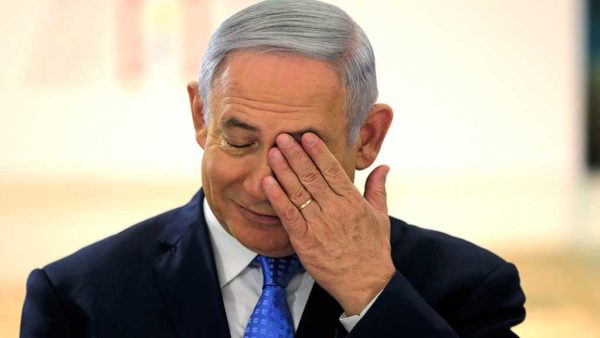 Opposition protesters waved black flags outside Benjamin Netanyahu’s residence on Friday, sensing vulnerability in the Israeli prime minister weeks before an election where he will face the shadow of corruption charges as well as a surging new rival.

Aiming for a fifth term on April 9 that would make him Israel’s longest-serving premier, Netanyahu is already playing catch-up. A poll issued on Friday gave his right-wing Likud party 29 seats, behind the 38 predicted for Blue and White, a new centrist alliance led by the charismatic former general Benny Gantz.

That survey was taken before Attorney-General Avichai Mandelblit announced on Thursday that he planned to indict Netanyahu on charges of bribery, fraud and breach of trust.

Cabinet minister Yuval Steinitz told Israeli radio he was “confident that Netanyahu will continue being able to contend with pressure of whatever kind”, noting that the previous Likud leader, Ariel Sharon, had won an election in 2003 despite a graft scandal.

But one of the Labour party flag-wavers, Alon Visser, said: “It is a black day for the citizens of Israel. We are all ashamed of our prime minister and we are calling him with one big voice: Please resign from your office.”

Netanyahu is suspected of wrongfully accepting $264,000-worth of gifts from tycoons, and dispensing favors in an attempt to secure positive coverage in a newspaper and on a website.

He denies any wrongdoing, but could face up to 10 years in prison if convicted of bribery. However, charges cannot be filed until Netanyahu has been given a chance to address a hearing – which is unlikely to happen before the election.

In the Tel Aviv suburb of Ramat Gan, social worker Coral Kala, 24, said she had not been surprised by Mandelblit’s announcement: “I think everyone was expecting this to happen.”