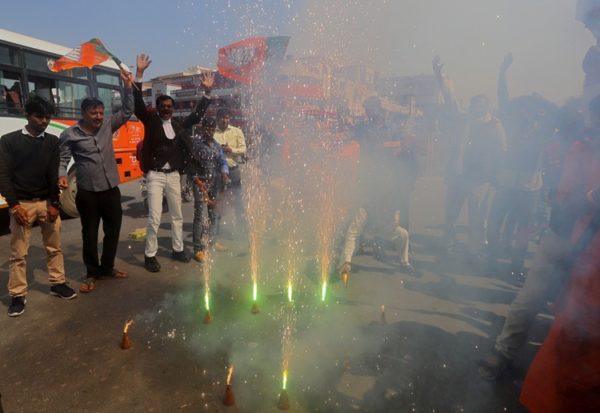 JAMMU/NEW DELHI, India  – Indians took to the streets in celebration across the country on Tuesday after the government said it carried out air strikes inside Pakistan killing hundreds of militants in a training camp.

The reaction may be a sign that support for Prime Minister Narendra Modi is surging months before a general election, pollsters said. Patriotism may be having a greater influence than concerns about low farm incomes and weak jobs growth.

Pakistan said there had been no casualties at all.

While the results of the strikes in the early hours of Tuesday were disputed, that didn’t stop many in India from believing their government’s version of events.

“Modi ji has finally done it”, said Sandeep Sharma, a driver in the Jammu region of India’s border state of Jammu and Kashmir, using an honorific for Modi. “There’s a lot of anger against Pakistan here.”

India’s opposition leaders, many of whom have banded together against the ruling Bharatiya Janata Party (BJP), congratulated the Indian Air Force (IAF), though they stopped short of praising Modi.

“I salute the pilots of the IAF,” Rahul Gandhi, leader of India’s main opposition Congress, said in a tweet.

In a village 100 metres from the Line of Control (LoC) that acts as the de facto border with Pakistan, men gathered around a bunker for security forces that is under construction and shouted slogans hailing India.

“We will celebrate tonight,” one said, “We have lost so many of our villagers to Pakistani firing.”

Shelling across the LoC has occurred frequently over the past few years but incursions into the other country’s air space are rare – let alone an attack well into Pakistan.

Modi has been under pressure to retaliate since the suicide car bombing in Kashmir’s Pulwama, which India alleges was orchestrated by Pakistan’s intelligence agency, and tensions between the nuclear-armed neighbors have escalated in recent days.

Tuesday’s strike will not only boost Modi’s campaign in the election due by May, political analysts said, but also take the spotlight off economic issues for which the BJP has felt the heat.

“I think this is going to boost the electoral prospects of the BJP because people are generally in a celebration mood, that the government has been able to teach a lesson to Pakistan,” said Sanjay Kumar, director of the CSDS think-tank and a leading pollster.

The BJP lost a string of state elections late last year, after which opposition parties have attempted to form a coalition to take on Modi.

And although his ratings have dropped to their lowest-ever level, Modi remains the most popular leader in the country, an India Today poll showed last month.

“A large proportion of voters who had started drifting away from the BJP would come back to the fold,” Kumar said. “This all goes to the advantage of the BJP.”

Also many BJP supporters who had become disillusioned with the party would feel relief, said Bhawesh Jha, founder of CNX, one of India’s largest polling companies.

“… They will work hard to ensure the victory of Narendra Modi,” Jha said. “Since this is happening so close to the election, Pulwama will be the biggest issue.”

Some recalled the so-called “surgical strike” on suspected militant camps in Pakistan in 2016 after an attack by militants on an Indian army camp.

By the afternoon, shortly after India’s foreign ministry provided some details of the strike, Modi spoke to a large crowd at an election rally in Churu, in the western state of Rajasthan.

“I can assure you that India is in safe hands,” he said from a podium placed before a collage of photographs of members of security forces who had died in Kashmir this month.