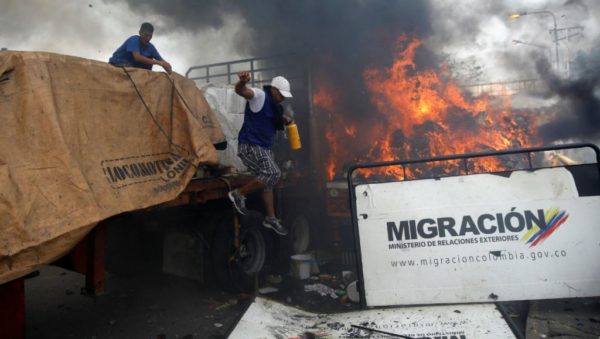 REUTERS/Marco Bello | At Francisco de Paula Santander bridge on the border between Colombia and Venezuela, on February 23, 2019, Opposition supporters unload humanitarian aid from a truck that was set on fire by Madoru security forces.
Share:

A convoy with humanitarian aid attempted to enter Venezuela from the territory of Brazil on 23 February, but was stopped at a customs checkpoint. Prior to this, Venezuelan President Nicolas Maduro called the delivery of US aid a pretext to “destroy the independence and sovereignty” of the state.

Brazil has urged the international community to join its “liberation efforts” for Venezuela amid a recent attempt to deliver humanitarian aid to the country, Reuters reported. Brazil condemned Maduro’s efforts to prevent humanitarian aid from entering Venezuela, calling it a “criminal act”.

At the same time, US Secretary of State Mike Pompeo expressed his opinion in an interview with CNN that Nicolas Maduro’s “days are numbered”.

“Predictions are difficult. Picking exact days is difficult. I’m confident that the Venezuelan people will ensure that Maduro’s days are numbered”, he said.

The secretary of state also slammed Maduro for blocking the humanitarian aid, calling the Venezuelan president a “sick tyrant”. He reiterated the US stance on possible military intervention, noting that all options are on the table.

Two convoys carrying US humanitarian relief from Brazil and Columbia attempted to enter Venezuelan territory, but were stopped by Caracas’ forces on 23 February. Previously, Venezuelan President Nicolas Maduro slammed the planned delivery of the aid, calling it a pretext for a US attempt to “destroy the independence and sovereignty” of the country, ordering the closure of the country’s borders.

The Venezuelan president also accused Washington of fabricating the humanitarian crisis over the course of the last four years in order to justify an intervention under the guise of aid. He added that the country is coping well with the difficulties it is facing, noting that despite US attempts to close foreign oil markets to Venezuelan crude, there are still plenty that remain open.