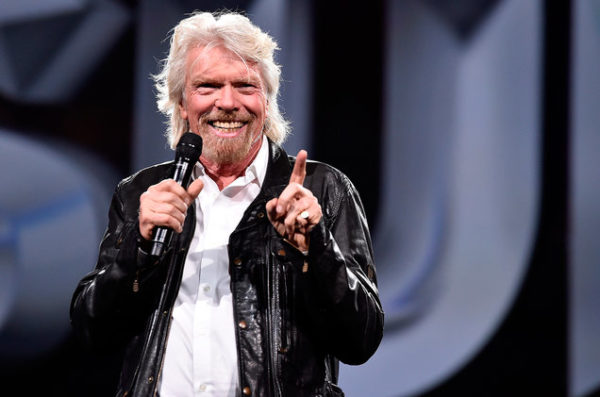 Sir Richard Branson is honored with star on the Hollywood Walk of Fame on Oct. 16, 2018 in Hollywood, Calif.
Share:

Venezuela’s power struggle is set to become a battle of the bands Friday (Feb. 22) when musicians demanding President Nicolas Maduro allow in humanitarian aid and those supporting his refusal sing in rival concerts being held at both sides of a border bridge where tons of donated food and medicine are stored.

The dueling concerts will literally set the stage for a showdown between Venezuela’s beleaguered government and opposition leaders who are pledging to draw masses of people to the country’s western border Saturday to try to usher in aid that Maduro has vowed not to accept into the country.

British billionaire Richard Branson is sponsoring a Live Aid-style concert featuring dozens of musicians including Latin rock star Juanes on one side of the border crossing that Colombian officials have renamed the “Unity Bridge,” while Maduro’s socialist government is promising a three-day festival deemed “Hands Off Venezuela” on the other.

A Look at Rival Branson vs Maduro Concerts For Venezuela

“The eyes of the world will be on Venezuela,” opposition leader David Smolansky said in advance of the concert as he spoke with Venezuelan migrants at a soup kitchen in the border city of Cucuta where the aid is being stored. “We hope that everything that has happened these last few weeks is the beginning of the end.”

As Venezuela’s political turmoil drags on, allies of Juan Guaido, who is being recognized by over 50 nations as the country’s rightful president, are hoping the massive concert and aid push mark a turning point from which a transitional government is consolidated. But Maduro has shown no signs of backing down, and analysts warn that whatever happens over the next two days may not yield a conclusive victory for either side.

“I think one of the government’s aims is to confuse the whole thing, possibly to create some kind of chaos that makes the opposition look bad,” Phil Gunson, a senior analyst with the Crisis Group based in Caracas, said of Maduro’s rival concert. “It’s a propaganda war.”

Branson agreed to back a concert in early February after being approached by Guaido, Leopoldo Lopez, an opposition leader under house arrest, and others including Colombian entrepreneur Bruno Ocampo, who said the magnate is now so committed to getting humanitarian aid into Venezuela that he will personally stay until Saturday to help ensure that food and medical supplies make it across the border.

Similar to the original 1985 Live Aid concert, which raised funds to relieve the Ethiopian famine, Branson has set a goal to raise $100 million within 60 days.

“We didn’t know what we were getting into at the time,” Ocampo said Thursday. “But in less than 24 hours we are going to witness something historic.”

Friday’s concert won’t be the first time artists have used music to try and simmer tensions at the restive Colombia-Venezuela border. A concert known as Paz Sin Fronteras — Peace Without Borders — was held in 2008 after a diplomatic flare-up that drew Venezuelan troops to the Colombia border. That event was held on the Simon Bolivar International Bridge, which 33,000 people now use to enter Colombia each day.

“Throughout history, art has had a big role in fostering change,” said Miguel Mendoza, a Venezuelan musician who will be performing Friday and won a Latin Grammy in 2010 as part of the pop duo Chino & Nacho. “Music, above all, has a magnificent power.”

Six hundred tons of aid, largely donated by the U.S., has been sitting in a storage facility at what is widely known as the Tienditas International Bridge for two weeks. Even as several million Venezuelans flee and those who remain struggle to find basic goods like food and antibiotics, Maduro denies that a crisis exists. He contends the aid is a ploy by the Trump administration to overthrow his government. The military has placed a large tanker and two containers in the middle of the bridge to block it.

“Trump should worry about the poor in his own country,” Maduro said this week.

Days after Branson launched his concert, Maduro’s government announced that not only would they hold a rival festival but that they would also deliver over 20,000 boxes of food for poor Colombians in Cucuta Friday and Saturday.

The sharp rhetoric from both sides has put many in this border city of 700,000 on edge.

Paola Quintero, an activist for Venezuelan migrants, said that while the concert has had a positive, short-term impact on Cucuta’s economy, many are worried about what might happen Saturday when thousands try to move aid across the border.

“What awaits those who will be on the bridge, trying to get aid through?” she said.

Venezuelans like Rosa Mora, 40, said they were still debating whether to heed the opposition’s call for a mass mobilization at three bridges in the Cucuta area Saturday, fearful that they might be met with resistance by the military.

“I’m terrified of what’s going to happen,” she confided.

Still, when she thinks about her children and a sister with diabetes that has gone untreated for the last year, she leans toward participating.

On Thursday afternoon, organizers on the Colombia side of the border bridge were doing sound checks while in Venezuela a dozen workers sat idly in white plastic chairs chatting and listening to Venezuelan folk music on small speakers.

Riding by the bridge on his bike, college student Frander Duenas said he hoped to sneak into Colombia to see Branson’s Venezuela Aid Live because he’s a fan of the musicians performing. The government’s festival didn’t entice him in the least.

“This concert is for old people,” he said. “No one is going to come here.”

A look at Branson vs Maduro Concerts

Dueling concerts are being staged this week on both sides of Venezuela’s border with Colombia. After billionaire Richard Branson announced an aid concert in Colombia on Friday to benefit Venezuelans suffering food and medicine shortages amid their country’s economic crisis, Nicolas Maduro’s government ordered up a rival concert of its own.

Maduro denies any humanitarian crisis exists, and has blocked food and medicine from the United States that is being warehoused on the Colombian border from entering Venezuela, claiming the relief effort led by opposition leader Juan Guaido is part of U.S.-orchestrated “coup” to oust him from power.

Branson told The Associated Press in an interview Monday that the concert he’s throwing on Friday will save lives by raising money for “much-needed medical help” and other aid for crisis-torn Venezuela. Minutes later, Maduro’s government announced what it called a “massive” concert for Friday and Saturday on the Venezuelan side of the border.

Here are some of the details for the dueling concerts:

Although he backs Guaido’s claim to the presidency, Branson told the AP that his concert is not funded by any government and that all the artists are performing for free. The wealthy British adventurer and founder of the Virgin Group said he’s aiming to raise $100 million from donations from viewers worldwide watching the concert on a livestream over the internet.

Branson’s concert plan and even its name — Venezuela Aid Live — immediately evoked comparisons to Irish rock star Bob Geldof’s 1985 Live Aid concert that raised money for famine relief in Ethiopia. It is to be held in Cucuta, a Colombian border city of some 700,000 that has been swollen by hundreds of thousands of Venezuelans who have fled hyperinflation and widespread shortages of food and medicine in their homeland.

“Venezuela sadly has not become the utopia that the current administration of Venezuela or the past administration were hoping for, and that has resulted in a lot of people literally dying from lack of medical help,” Branson told AP in a telephone interview from Necker, his private island in the British Virgin Islands. “I think it will draw attention to the problem on a global basis.”

Battle Of The Bands

Branson says up to 300,000 people are expected to attend Friday’s concert, which is free to the public so impoverished Venezuelans can attend. Its lineup includes Mexican band Mana, Spanish singer-songwriter Alejandro Sanz and Dominican artist Juan Luis Guerra. The organizers confirmed Tuesday that despite reports, Manu Chao would not be performing, and Branson said Peter Gabriel could not attend.

“We want to make it a joyous occasion,” Branson said of the concert. “And we’re hoping that sense prevails and that the military allows the bridge to be open so that much-needed supplies can be sent across.”

Maduro’s government will throw what it has dubbed a “Hands Off Venezuela” concert Friday and Saturday on Venezuela’s side of the border. The government has not announced the lineup, but Maduro said that Venezuela will import 300 tons of aid from Russia and his government has promised to send 20,000 boxes of government-subsidized food to the poor in Cucuta, where tons of U.S. aid is sitting earmarked for Venezuelans.

Saturday’s government concert coincides with the date Guaido has called for “caravans” of tens of thousands of Venezuelans to assemble to carry the aid from Colombia into Venezuela.

The rival bids for aid and concerts to shore up support are part of a tense bid by Maduro and the opposition to break a nearly monthlong stalemate over power in Venezuela. Guaido declared himself Venezuela’s rightful president on Jan. 23, a claim backed by the U.S. and dozens of other countries that argue Maduro’s re-election was fraudulent because popular opposition candidates were banned from running.

Maduro has held on to the support of the military, the country’s main powerbroker, and relies on powerful allies like Russia and China in a conflict with increasingly Cold War-like dimensions.