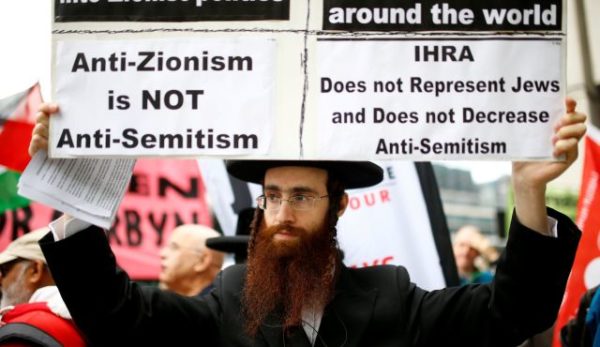 A group of French lawmakers proposed a bill Monday that would make anti-Zionism a criminal offence in the same way that anti-Semitism is illegal in France. But many argue that  opposition to Israel is not comparable to anti-Semitism.

An ugly scene over the weekend in which vulgar anti-Semitic slurs were hurled at French philosopher Alain Finkielkraut led the Paris prosecutor’s office to open an inquiry Sunday into “public insult due to origin, ethnicity, race or religion”. The next day, a group of lawmakers from a parliamentary committee against anti-Semitism said they wanted to criminalise anti-Zionism in France.

A resulting debate has raised thorny questions over anti-Zionism and anti-Semitism, with many insisting there is a distinction between being anti-Jewish and being against either the state of Israel or the policies of the Jewish state.

Anti-Semitism is defined by the Oxford dictionary as “hostility to or prejudice against Jews”. Under French law, it is considered a crime like other forms of discrimination, including racism and xenophobia.

Zionism, meanwhile, refers to a political movement founded by Austro-Hungarian writer Theodore Herzl in the late 19th century proposing the creation of a Jewish state on what is now Israeli soil. Herzl was convinced that it was impossible for Jews to assimilate in the countries where they lived as a diaspora as long as anti-Semitism existed.

As a result, anti-Zionism came to be defined as opposition to the creation a Jewish state. But since Israel was founded in 1948, the concepts of Zionism and anti-Zionism have evolved. In France, anti-Zionism is now largely associated with anger at the state of Israel.

The distinction became further blurred in 2017, when French President Emmanuel Macron made international headlines for condemning anti-Zionism as a “reinvented form of anti-Semitism” during World War II commemorations in Paris.

His comments prompted French journalist Dominique Vidal to speak out against conflating the two issues in an essay entitled, “Anti-Zionism = Anti-Semitism? A response to Emmanuel Macron”.

“If we consider opposition to Theodore Herzl’s theory as anti-Semitic, then we’re saying that the millions of Jews who do not wish to live in Palestine and the occupied territories are anti-Semites,” Vidal told FRANCE 24. “It’s historical illiteracy, or worse, stupidity.”

But confusion over the two issues has only been exacerbated by anti-Semitic rhetoric in France that is at times deftly disguised as anti-Zionism.

“We know that [French comic] Dieudonné and [French far-right author] Alain Soral, both of whom have been convicted for inciting hatred against Jews, have adopted the habit of substituting the word ‘Zionist’ for ‘Jew’ and ‘anti-Zionist’ for ‘anti-Semite’ to avoid legal troubles,” Vidal said.

Recent decisions by Israel’s government, such as adopting a controversial law defining the country as a nation state for the Jewish people, have also contributed to the confusion over the terms.

“[Prime Minister] Benjamin Netanyahu has given his country a bad image by racking up populist alliances as well as having the Knesset vote on issues such as the Jewish nation-state law and annexing the West Bank,” Vidal said. “The confusion between anti-Semitism and anti-Zionism allows [Netanyahu], who is concerned about his own image, to silence his opponents. But it is futile, because Israel’s bad image in recent years is directly linked to Israeli policies.”

Sylvain Maillard, one of the French lawmakers behind the proposal to criminalise anti-Zionism, has rejected accusations that his bill conflates the two issues.

Critics of the bill don’t see it that way, warning it could restrict freedom of expression in France.

The bill has sparked concerns even at the highest levels of government. Richard Ferrand, president of the national assembly (lower house of parliament), said on Tuesday that the country’s existing laws against discrimination were “more than enough” to fight against anti-Semitism, and called for “deep thought before making impulsive announcements”.

Macron also spoke out against the measure during a press conference on Tuesday, contradicting his comments from two years ago.

“I don’t think that criminalising anti-Zionism is a good solution,” he said. “Those who want Israel to disappear are the same people who want to attack Jews.”

“I think that once we look at this in detail, criminalising anti-Zionism raises other issues,” Macron added.