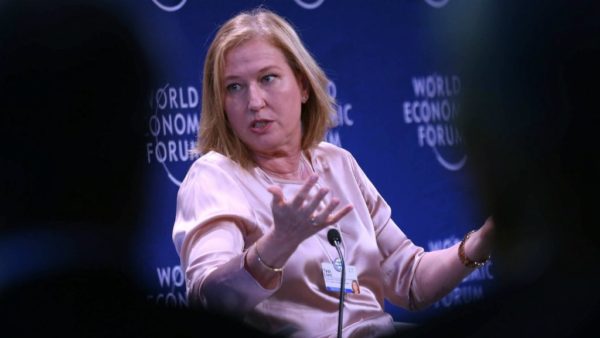 One of Israel’s most prominent dovish politicians, former foreign minister Tzipi Livni, said on Monday she was leaving politics and warned “democracy is in danger”.

A former peace negotiator with the Palestinians, Livni won recognition abroad for her part in U.S.-brokered talks that aimed to end the decades-old conflict and which collapsed in 2014.But her career has foundered in recent years, along with the Middle East peace process. The United States plans to present a new peace plan after Israel’s April 9 election, although expectations of a breakthrough are low.

“I am leaving politics but I will not let Israel abandon the hope for peace,” a tearful Livni told a televised news conference in Tel Aviv.

“These past years have been hard for me and for the things I believed in … peace became a dirty word, and democracy is in danger,” she said, citing Prime Minister Benjamin Netanyahu’s criticism of legal authorities conducting corruption probes against him and attacks he has made on the local media.

Opinion polls have shown that Livni’s centrist Hatnua party was expected to win no seats in parliament in the election in which the right wing, led by Netanyahu’s Likud party, looks likely to prevail.

Hatnua had been part of the biggest left-wing faction in parliament, the Zionist Union, together with the Israeli Labour party.

But in January the alliance, which led the opposition, ended after Labour head Avi Gabbay dumped Livni on live television as he announced he was dissolving the partnership.

Livni, now 60, served as foreign minister from 2006 to 2009. A former junior officer in the Mossad intelligence agency, she has been a member of several parties and coalition governments since entering politics in 1999 and has quit politics before only to return.