Trump declaring a national emergency to get his wall. Rep. Castro calls it “fake emergency” 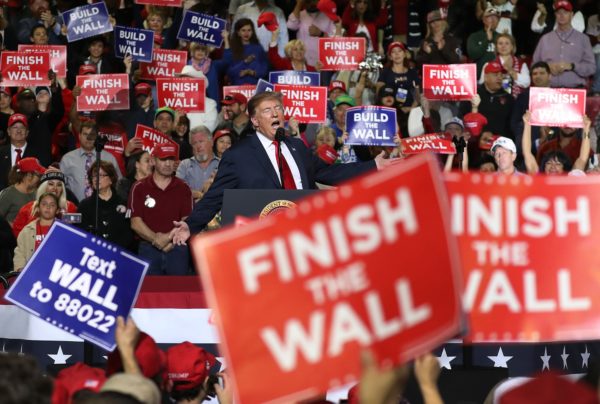 Congress knew President Donald Trump thought there was a border crisis when it voted to curb his wall Thursday.

In the arcane language of House and Senate appropriators, endorsed by veto-proof majorities in both chambers, lawmakers said Trump could have no more than $1.375 billion to build 55 new miles of steel fencing. They specifically cited the risk to law enforcement in banning him from constructing solid walls.

It was a resounding and explicit rejection of the idea that there is a national emergency requiring billions of dollars to build a border wall. And that judgment was rendered at a time when Trump has been making a very public case — in speeches, interviews and tweets — that there is a “humanitarian and security crisis” and after he shut down the government for 35 days to make his point.

This is not a case in which an act of God or war struck when Congress was dormant; lawmakers reacted — just not in the way the president had hoped.

Put simply, Congress heard Trump’s plea for emergency funding and used its primary authority under the Constitution — the power of the purse — to say no.

That’s not an answer Trump likes to hear. So he’s not taking it.

Instead, he is planning to announce Friday morning that he will declare a national emergency and draw $8 billion from the just-passed bill and other existing federal accounts to build the wall anyway, according to an administration official. Lawsuits will ensue, and the courts will have to decide whether and how to intervene in a power struggle between the other two branches.

Whatever the case at the border, there’s now a clear constitutional crisis that will bolster the power of either Congress or the president.

It’s an outcome that many lawmakers — both supporters and opponents of the president — had hoped to avoid.

“I don’t want to see him do that, but it is sad that he is in the position of even having to do that and he would not need to do that had Congress simply done their job and funded the government and funded the wall,” Rep. Rob Bishop, R-Utah, said before the president’s decision had been confirmed. “Blame Congress.”

Rep. Donna Shalala, D-Fla., a former secretary of Health and Human Services under President Bill Clinton, said it would be improper for Trump to take money intended for other purposes and shift it to building a wall.

“That’s why there’s going to be a legal challenge,” she said. “I hope he doesn’t do that.”

Many Republicans, particularly establishment conservatives, have said in recent weeks that it’s a bad idea for Trump to use executive powers to circumvent Congress. They envision a Democratic president tapping emergency powers and federal accounts to address liberal wish lists in the future.

But on Thursday, it wasn’t that hard to find Republicans on Capitol Hill who were fully behind Trump.

“If we have a national emergency issue, which we have — we have a crisis going on on the border — then I support his ability to do what he needs to at that point,” said Rep. Markwayne Mullin, R-Okla.

Democrats said there was no crisis, other than the political box Trump built for himself by promising his base that he would build the wall in the first place.

“This is a fake emergency,” said Rep. Joaquín Castro, D-Texas. “In the past, presidents have called national emergencies over national security issues or disasters.”

Castro said that he is prepared to introduce a measure that would terminate Trump’s emergency declaration, which could get a vote in the House but is unlikely to see floor action in the Republican-controlled Senate.

In order to stop the process he’s launching Friday, the president would have to sign a termination measure, or it would have to get a two-thirds majority over his veto.

“I don’t believe he would have the support in the Senate — if they’re required to vote,” Castro said.

“I think it’s a dangerous step,” he said. “One, because of the precedent it sets. Two, because the president is going to get sued and it won’t succeed in accomplishing his goal, and three, because I think [Speaker Nancy] Pelosi will then introduce a resolution which will pass the House, then come over here and divide Republicans. So to me, it strikes me as not a good strategy.”

In theory, Congress could have gone further to stop Trump from building a wall. The new bill could have included a “none-of-the-funds” provision prohibiting him from using any federal money to build a barrier along the border. But a provision like that would surely have drawn a veto — if it didn’t sink the bill in the Senate — and possibly forced another government shutdown.

Given its strong desire to avoid that, Congress spoke as forcefully as it could to pre-empt Trump’s emergency declaration.

Now, the courts will decide who really has the power over the wall.

Q: What is a national emergency?

A: In 1976, Congress passed the National Emergencies Act, which permits the president to pronounce a national emergency when he considers it appropriate. The act offers no specific definition of ‘‘emergency’’ and allows a president to declare one entirely at his or her discretion.

By declaring a national emergency, the president avails himself or herself of dozens of specialized laws. Some of these powers have funds the president otherwise could not access.

Under current law, emergency powers lapse within a year unless the president renews them. A national emergency can be redeclared indefinitely, and, in practice, that is done frequently. There have been 58 pronounced under the National Emergencies Act, of which 31 are still in effect.

Q: When have they been declared in the past?

The vast majority have been economic sanctions against foreign actors whose activities pose a national threat, according to Elizabeth Goitein, co-director of the Brennan Center for Justice’s Liberty and National Security Program. A handful of others have involved noneconomic crises:

Bush declared a national emergency after the terrorist attacks of Sept. 11, 2001; the order is still in effect.

Q: Is a national emergency the same thing as an executive order?

A: In general, national emergencies have been declared through executive orders. An executive order is a command issued by the president that carries the force of law. The power is authorized, in part, by Article II of the U.S. Constitution.

Executive orders direct federal agencies on how to spend available resources. Thousands have been created by past presidents, covering topics as varied as the duties of the commander in chief.

The U.S. Supreme Court has only rarely held an executive order invalid, including one issued by Harry Truman in 1952 that seized the country’s steel mills during the Korean War, and another from Clinton in 1995 involving workers on strike.

Executive orders do not create new law or allocate additional funding, which is where Trump has run up against congressional hurdles.

Following his inauguration, Trump issued an executive order making construction of a barrier wall across the southwest U.S. border a federal priority. The wall could not be built unless Congress provided him with the funds.

Q: How does a president declare a national emergency?

A president must issue a written and signed declaration that specifies the specific emergency powers he plans to rely on and invoke.

‘‘Unlike other executive orders, one that declares a national emergency unlocks the powers contained in more than 100 other laws,’’ Goitein told The Post.

Of the vast statutory powers Trump would avail himself of, Goitein said two could arguably allow him to build the border wall with Defense Department funding. These federal statutes make available some funds set aside for military construction projects or repurpose money originally dedicated to civil projects supporting the military and national defense.

Q: What happens once a national emergency is declared?

A: Even though there aren’t many limits on a president’s ability to declare an emergency, it does not create carte blanche freedom to act.

Anyone directly affected by the order can challenge it in court, which Goitein said will almost certainly happen in this case. Congress can also draft a concurrent resolution to terminate the state of emergency, leading to a somewhat novel act. Ordinarily, congressional resolutions support a president’s declaration of a national emergency.

House Speaker Nancy Pelosi, D-Calif., is expected to bring up a ‘‘joint resolution of termination’’ in the House. Doing so would force Senate Majority Mitch McConnell, R-Ky., to also bring up the resolution in the GOP-majority Senate, putting his members in a difficult position.

The House Democrats can also join an outside lawsuit or choose to sue on their own.

Q: Does Congress have enough votes to terminate the emergency declaration?

A: Like any legislation passed by Congress, the president could veto the resolution unless it has received supermajority support (two-thirds in each chamber). Many Republicans have been critical of this approach by Trump, mainly because they see it as a slippery slope for a future Democratic president using the power to advance his or her policy goals. But it’s unclear whether there’s enough of them to vote against the president (and his base) to override a veto.