Saudi prince: Iran is turning its ‘people into paupers’ instead of providing food 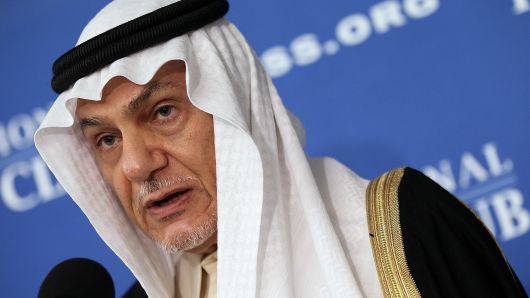 Iran is funding militias throughout the Middle East while turning its own people into paupers, Saudi Arabian Prince Turki Al-Faisal told CNBC Tuesday.

“I’ve described Iran in the past, and I think the description still fits, the leadership in Iran has developed into a paper tiger with steel claws,” he told CNBC Tuesday.

“The ‘steel claws’ are the militias that they have established throughout the Middle East, whether it’s Hezbollah (in Lebanon) or the Houthis (in Yemen) or the al-Abbas (a Shia militant group in Syria) or the various militias operating in Iraq and Syria whose main purpose is to further Iran’s influence and its domination of the areas in the Middle East,” he said, speaking to CNBC’s Hadley Gamble at the Milken Institute summit in Abu Dhabi.

Iran and Saudi Arabia are rival religious and political powers in the Middle East. Relations between the Sunni-majority Saudi Arabia and Shia-dominated Iran have hit rock-bottom in recent years with civil wars in Yemen, Syria and Iraq seen as proxy battlegrounds between the two countries. Iranian support for the militant group Hezbollah in Lebanon and even, sporadically, to the Taliban in Afghanistan, in the form of weaponry and military training, has also made Iran a pariah on the global stage.

A sluggish economy, made worse by re-imposed U.S. sanctions, and rising food prices have also fueled civil unrest and demonstrations against the government. Iranian President Hassan Rouhani said last month that Iran was facing its toughest economic situation “in 40 years.” The International Monetary Fund has predicted the country’s growth contracted by 1.5 percent in 2018 and will slump by 3.6 percent in 2019.

Al-Faisal likened Iran to a “paper tiger” because he said poverty and protest were rising in the country with a “dysfunctional” government. He said he didn’t know whether there would be regime change in Iran but hoped U.S. sanctions would change the leadership’s conduct.

“I think it would be premature to try to predict anything of that sort but … they’re (the Iranian administration) is turning its people into paupers instead of providing them with health services, with food and with things people look forward to … I hope with President (Donald) Trump’s sanctions we’re going to see a change in the conduct in the leadership in Iran. The Iranian people are the first victims of this leadership.”

Ahead of the Trump administration’s re-imposition of sanctions last fall, hundreds rallied to demonstrate against hyperinflation caused by the anticipated restrictions and economic mismanagement on the part of the regime. Demonstrators in some towns attempted to set fire to buildings, with scores detained and reports of at least one person killed. Censorship in the Islamic Republic, however, makes it hard to verify the actual size of demonstrations.

But while some in the Trump administration have alluded to regime change as an aim of the punitive sanctions, the domestic fallout is unlikely to shake the government’s hold on power, Iran experts say. Iranian security forces are powerful and highly loyal to the government.

Amid national celebrations of the 40th anniversary of Iran’s Islamic Revolution, officials in Tehran have issued public statements insisting that sanctions will not hinder the country’s progress. In January, European countries established a trade mechanism to facilitate non-dollar transactions with Iran and effectively skirt the U.S. restrictions, though its success is uncertain.

Iran has long accused Saudi Arabia of destabilizing the region, and the two regularly exchange charges of malicious activity and human rights abuses — something each country has been roundly accused of by international rights groups and multilateral organizations, including the United Nations.

It has long been feared that animosity between Saudi Arabia and Iran could lead to open warfare — Iran has carried out numerous ballistic missile tests and recent reports reveal what weapons experts say is a ballistic missile manufacturing facility deep in the Saudi desert. And Saudi Crown Prince Mohammed bin Salman told media last March that “without a doubt if Iran developed a nuclear bomb, we will follow suit as soon as possible.”

Al-Faisal said he couldn’t comment on reports that Saudi Arabia is building ballistic missiles at secret locations in the desert. “I have not seen any official comment on them so I can’t really comment on whether missiles are being developed or not.”