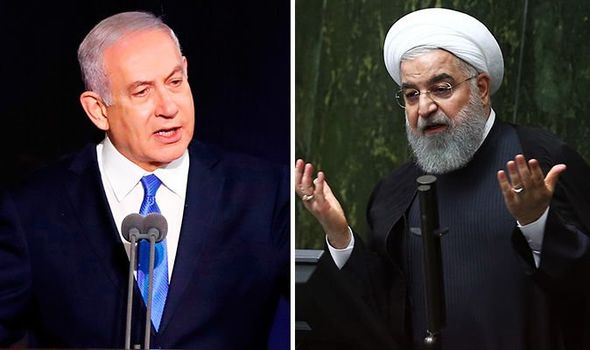 Iran has warned Israel of a “firm and appropriate” response if it continued attacking targets in Syria, where Tehran has backed President Bashar al-Assad and his forces in their nearly eight-year war against rebels and ISIL fighters.

Israel, which views Iran as its biggest security threat, has repeatedly attacked Iranian targets and those of its allied militia in Syria.

With an election looming in April, Israel has been increasingly open about carrying out its air strikes.

In a meeting on Tuesday with Syria’s Foreign Minister Walid al-Moalem in Tehran, the secretary of Iran’s National Security Council Ali Shamkhani said the Israeli attacks violated Syria’s territorial integrity and were “unacceptable”.

“If these actions continue, we will activate some calculated measures as a deterrent and as a firm and appropriate response to teach a lesson to the criminal and lying rulers of Israel,” Shamkhani was quoted as saying by the Fars news agency.

If #Israel continues its actions in #Syria, calculated measures will be activated as a deterrent and firm and appropriate response to teach a lesson to lying and criminal rulers of Israel: #Iran‘s Shamkhani pic.twitter.com/eg6c7NwH25

But Israeli Prime Minister Benjamin Netanyahu said last month that Israeli forces would continue to attack Iranians in Syria and warned them to “get out of there” fast.

Israel has sought to avoid direct involvement in the conflict in war-torn Syria, but has acknowledged carrying out dozens of attacks to stop what it says are deliveries of advanced weaponry to its Lebanese enemy Hezbollah.

It has also pledged to prevent its regional rival Iran from entrenching itself militarily in Syria, and a series of attacks that have killed Iranians in Syria have been blamed on Israel.

“We are working to prevent Iran from establishing a military presence in Syria,” Netanyahu said.

“We will not relent in pursuit of this goal just as we did not relent in bringing about the cancellation of the bad nuclear agreement with Iran.”

In January, Israeli planes carried out an attack on what they called an Iranian arms cache in Syria.

In May last year, Israel hit dozens of military sites in Syria after accusing Iran of launching rockets and missiles towards its forces in the occupied Golan Heights.

And in July, it carried out air attacks on three Syrian military facilities in Quneitra province following the incursion of what it said was a Syrian drone into its airspace.

However, Netanyahu and officials have also expressed concern over the US withdrawal from Syria because it could enable Iran to expand its influence and presence in the country.

The prime minister has urged the US and other countries to recognise Israel’s sovereignty over the strategic Golan Heights it seized from Syria in the 1967 War and later annexed.

For his part, Bolton last month said the US backed Israel’s right to self-defence and said the Trump administration will continue to work with Israel to counter “the continuing threat of Iran’s quest for deliverable nuclear weapons”.