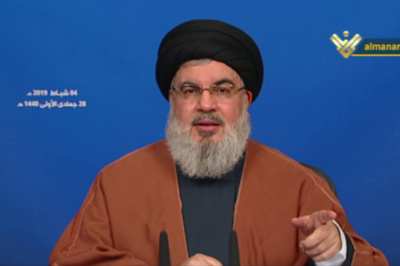 He was responding to comments made by Israeli  Prime Minister Benjamin Netanyahu who claimed that  Iran-backed Hezbollah now controls Lebanon government and vowed to stop all acts of aggression from Lebanon , Syria or Iran.
“Hezbollah joined the Lebanese government, and now it controls the government, and thus Iran controls it,” Netanyahu said while briefing a delegation of United Nations leaders, just before they headed to Israel’s northern border to inspect one of Hezbollah’s cross-border attack tunnels. The delegation is in Israel on a mission headed by Israel’s UN envoy Danny Danon.

Commenting on US warning that Hezbollah could divert funding from the health ministry which it now controls he said.
“We don’t want projects, business or anything and we don’t want to be accused of anything, seeing us our primal concern is humanitarian.
Nasrallah added : The money of the Lebanese state belongs to the state and there is a legal responsibility towards this money in addition to the ethical responsibility, because the minister and the ministry are entrusted with this money.

He added: “The health minister is not a member of our party and we have taken this decision for the sake of the country’s interest.”

Nasrallah  called for combating corruption and the waste of public money  and offered to  be a   partner in addressing the difficult files.
“There is consensus that there is a financial and economic threat and therefore the government must say how it intends to prevent the financial collapse.” Nasrallah added

He concluded his speech by calling for “calm and rapprochement”.

As in the case of the formation of all previous governments  Hezbollah was accused of being behind the  delay in  formation of this government when it  pressed  a demand for one of its Sunni allies to be given a post in a new government after  politicians agreed on a  government makeup .