Hariri tells Jumblatt: We want to rescue the state 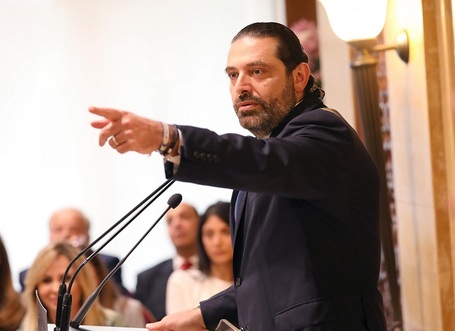 “Certainly the state is not our property, but it also does not belong to any leader or party. Our project is clear and aims to rescue the state from collapse and send the guardians of corruption to retirement,” Hariri tweeted, in response to a tweet by Jumblatt.

Earlier, Jumblatt attacked  Hariri and Free Patriotic Movement chief MP Jebran Bassil, saying that the state is not their “property.”

“The thing more important than the CEDRE conference is to pinpoint the sources of public money waste and smuggling and to reject any hike in electricity fees,” he added.

“For example, you can recover 40% of the wasted funds,” the PSP leader went on to say.

Earlier in the day, Hariri said he was determined to work relentlessly following the monthslong gridlock, assuring that nothing will stop him despite “criticism” against his new government.

“Criticisms against the government began and we haven’t even started working yet. I am determined to work and won’t be affected by any attempts to stand in my way,” The PM’s media office quoted him as saying.

“The citizen will finally be the top priority, after a nine-month-long formation delay. I will work day and night to compensate for the time wasted during the formation process,” he added.

Discouraging any attempts aiming at hampering the government’s work, he said he is eager to ease any difficulties.

Both Hariri and Bassil had blasted Jumblatt in recent hours after he accused them of hegemony, unilateralism and disregard for the Taef Accord.

“The Premiership will not be an easy target for anyone… and it does not need lectures in constitutional norms and requirements from anyone,” Hariri went on to say, accusing Jumblatt – without naming him – of “falsifying the facts, especially as to the drafting of the cabinet’s policy statement.”

Separately, the PSP leader acknowledged  that those who carried out the attack  against the Al Jadeed TV are supporters of his party .

“The perpetrator is present and I will await for the right circumstances to hand him over,” Jumblatt said stressing he is against the attack .

On the other hand he vowed to sue al Jadeed blaming the channel’s satirical TV show for the attack.

“There are certain segments of society who do not tolerate insults against their icons,” the PSP leader added, describing the ‘Abu al-Qaaqaa’ character in Charbel Khalil’s ‘Qadah wa Jamm’ satirical TV show as “another type of attack against Walid Jumblatt.”

At around 3:45 a.m., the assailants sped past Al Jadeed’s offices in Beirut’s Wata al-Moseitbeh in a car and launched a hand grenade toward the building before fleeing the scene.

The grenade hit a parked car, and no injuries were reported.

Images posted on Al Jadeed’s website showed smashed car windows and damage to one of the building’s external columns.

Head of public relations at Al Jadeed Ibrahim al-Halabi said during a live TV interview at the scene that the building’s security guard had seen a group of young men staging a sit-in outside the building at around 1 a.m. According to the guard, the group was protesting an episode of Al Jadeed’s comedy show “Qadah wa Jamm.”