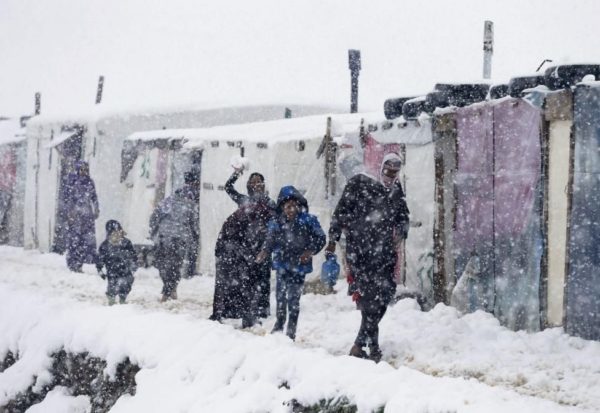 Storm Norma has hit Lebanon, inundating refugee camps with heavy rainfall and completely blanketing some homes in thick snow. Volunteers and refugees have taken to social media to share videos and photos of the freezing conditions and to plead for humanitarian aid.

Settlements from the Akkar plains in the north of Lebanon to the Beqaa Valley that runs down the eastern side of the country have been destroyed in the extreme weather. Storm Norma barrelled through Lebanon on Saturday January 5, forcing many Lebanese residents out of their home because of dangerous flooding.

Photos of a refugee camp in Arsal, in the east of Lebanon, have shocked people online. They show tents covered in a thick layer of snow.

One volunteer for the Syrian NGO Molham Volunteering Team posted a Facebook Live showing the conditions in a camp in Arsal, in the east of Lebanon, where 7,200 families live in 116 tents. He tells viewers on the live video that requests for donations had yielded £100,000, and the organisation was going to begin distributing canisters of fuel for families to heat their tents.

Lebanese Red Cross  reportedly rescued 500 people from flooded tents in the refugee camp of Semmaqieh. Another 300 people have been relocated from their destroyed camps by the United Nations Refugee Agency.

Ahmad Abussar is a volunteer for Molham Volunteering Team at the Arsal camp. He told the FRANCE 24 Observers team that the weather conditions have made life unbearable for the people living in the area.

“The people are desperate for warmth”

The conditions are so bad. The snowstorm lasted for two days and now the whole camp is covered in snow. The 50,000 people living in this area live in tents. They depend on diesel fuel for heating with oil burners. The people are desperate for warmth.

There are 10 volunteers [from Molham Volunteering Team], and we are all staying in the camp too. People are getting ill because of the cold, but we can’t take them to hospital. The roads are completely covered by snow, and they’ve been closed.

There is no official aid from the Lebanese authorities. No one has come, apart from local NGOs and organisations.

There are around 1.5 million Syrian refugees in Lebanon according to government estimates, who came to the country after fleeing the deadly civil war. Syrian refugees do not have the right to build concrete structures in their settlements as the government does not want to encourage permanent residence.