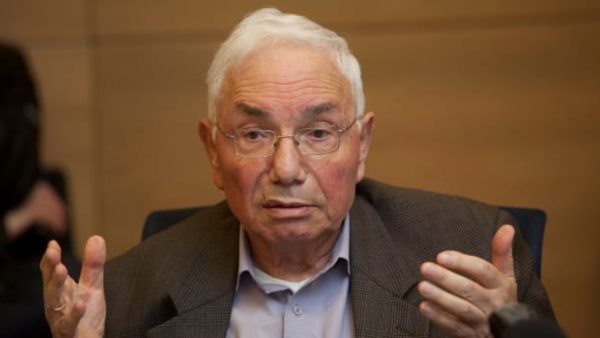 Retired Supreme Court Justice Eliyahu Matza who served on the high court from 1991 to 2005.Olivier
Share:

Israel PM Benjamin Netanyahu is urging Israelis to view any indictment against him to be illegitimate if it occurs before election. Retired Supreme Court Justice Eliyahu Matza who served on the high court from 1991 to 2005 compared Netanyahu to a Mafia boss.

Jerusalem- A former vice president of Israel’s Supreme Court has accused Prime Minister Benjamin Netanyahu of acting like a Mafia boss in his recent efforts to influence public sentiment against a possible decision to indict him for corruption crimes.

“I cannot recall any time in my entire career such statements against law enforcement by anyone other than heads of crime organizations,” Eliyahu Matza told national broadcaster Kan B Radio on Sunday.

Matza’s stinging criticism came in response to Netanyahu uploading a video to his Facebook account on Saturday urging Israeli citizens to consider an indictment against him to be illegitimate if it occurs before the upcoming national elections.

Netanyahu compared himself being indicted before the election to chopping off a thief’s arm before finalising the case against him.

“It is forbidden under any circumstances to make such statements that the prime minister made, which in my opinion are no less than incitement against the attorney general and against the legal authorities,” Matza said, adding that he was referring to the legal definition of incitement “in the criminal sense of the word”.

In the elections scheduled for 9 April, Netanyahu is running for a fourth consecutive term as Israeli prime minister, his fifth term overall.

Netanyahu’s viral video, and other recent threats made by officials from the ruling Likud party against Attorney General Avichai Mandelblit, who must now decide whether to lay charges against Netanyahu, are tantamount to the behaviour of the mafia, Matza said.

“The statements of the prime minister are in the category of crossing every red line, in terms of relating to the legal authorities,” said Matza, who served on the Supreme Court from 1992 to 2005.

Last month, Mandelblit discovered that his father’s grave had been recently desecrated, with no other graves in the same cemetery found to have been similarly damaged.

Two weeks later, the right-wing tabloid Israel Hayom reported that officials in Netanyahu’s Likud party, if not Netanyahu himself, were trying to bully Mandelblit into shelving his indictment decision until after the general elections in April.

“If he will publicise his decision before the election, Mandelblit will be attacked mercilessly,” Israel Hayom quoted Netanyahu as saying, later altering the subheadline to attribute the quip instead to an unnamed Likud party official.

“These things are unacceptable. We want to live in a normal country. We want the attorney general to be able to go to the cinema in the evening without being surrounded by security agents. It’s unacceptable,” said Matza.

“Why else would there be so much security around the attorney general? In all my long years, I cannot recall in my career statements such as these against the legal authorities that were made by someone who was not the head of a criminal organization.

“He needs to understand that serving as prime minister is not a private property that he brought with him from home, and that must be retained at any price,” said Matza.

In December, after a two-year investigation, Israeli police said they had found evidence to recommend pursuing bribery and corruption charges against Netanyahu and his wife Sara.

Authorities claim that Netanyahu gave favourable contracts to Bezeq Telecom in exchange for better coverage of the prime minister and his wife on its news website.

The latest round of allegations comprise the third corruption case to be levelled against the Israeli leader.

Mandelblit is still weighing whether to indict the prime minister in the other two cases.

Netanyahu has denied all charges of corruption, claiming “these recommendations were determined and leaked even before the investigations began”.

A source in Mandelblit’s office told the Israeli newspaper Haaretz to expect that the attorney general will announce next month whether Netanyahu is to be indicted.

Matza said that Netanyahu brought forward the election in order to get to the hearing with Mendelblit as a newly re-elected prime minister.

This backfired, according to Matza, who said that the prime minister’s “move forced the attorney general and state prosecution to work faster in order to fulfill their duty”.

According to Haaretz, the decision to make the announcement in advance of the elections is supported by Mandelblit’s predecessor Yehuda Weinstein and other senior officials in the Justice Ministry.

Netanyahu has stated that he will not step down from office if he is indicted while still serving as Israeli prime minister.

For his part, Mandelblit has ruled that Netanyahu would not be legally obligated to step down under such circumstances.

A Channel 13 poll published on Saturday revealed that nearly two-thirds of Israelis believe that Mandelblit should publicly announce his decision regarding the charges against Netanyahu in advance of the upcoming election.