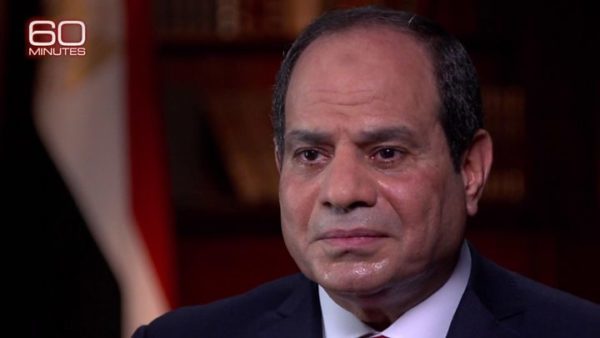 By TAMER EL-GHOBASHY
Egyptian President Abdel Fatah al-Sissi told CBS News that Egypt and Israel are cooperating to battle a stubborn Islamic State insurgency in the Sinai, and denied that the tens of thousands of Egyptians jailed since he took power are political prisoners.

Those two statements are newsy, but not necessarily new.

It’s what happened after he granted the interview to “60 Minutes” in New York that is making headlines.

In a story promoting the sit-down with Sissi, set to air Jan. 6, CBS says Egypt’s ambassador (it was not clear to which country) contacted the “60 Minutes” crew and told them not to air the interview.

CBS did not elaborate on the ambassador’s demand, saying only that Sissi’s answers “were not the kind of news his government wanted broadcast.”

The Egyptian Embassy in Washington did not immediately return a call seeking comment.

A teaser clip for the Sissi interview shows the Egyptian leader denying a Human Rights Watch claim that 60,000 people have been thrown in jail for their political beliefs since the former defense minister seized power in 2014 by overthrowing Egypt’s first freely elected president, Mohamed Morsi of the Muslim Brotherhood.

Sissi cracks a small smile and tells the interviewer, Scott Pelley, that he has no idea where Human Rights Watch got that figure.

“I said there are no political prisoners in Egypt. Whenever there is a minority trying to impose their extremist ideology we have to intervene regardless of their numbers,” he continued.

Sissi has made this false claim before, and the assertion that his opponents are all Islamist extremists has underpinned his nearly five-year rule. But human rights groups and his Egyptian critics point to a far-reaching crackdown on dissent that has ensnared many more people than just Muslim Brotherhood supporters — including some of the secular and reform-minded activists who became prominent during the 2011 revolt that unseated longtime dictator Hosni Mubarak.

Many critics have said Sissi is overseeing a period of repression in Egypt that far exceeds that of the Mubarak era, which lasted nearly 30 years. Egyptian politicians are now agitating to allow Sissi to retain his office beyond the constitutionally mandated two four-year terms.

What could have spooked Sissi and his government was his apparently confirming that Egypt has allowed Israel to conduct airstrikes in the northern Sinai peninsula, where a low-level insurgency ballooned into a full-fledged campaign of terrorism after Sissi’s rise to power.

It is unlikely that Sissi and his top leadership would be nervous about his statements on human rights abuses — his government is unapologetic about its record and has not been held to account for it by any foreign government or the United Nations.

Last February, The New York Times revealed the extent of the cooperation between Egypt and Israel, two former enemies that have since normalized relations despite an unfavorable view of Israel by a vast-majority of Egyptians.

When Pelley asked whether “this cooperation with Israel was the closest ever between two enemies that once were at war,” Sissi responded: “That is correct… . We have a wide range of cooperation with the Israelis.”

Reaction to the Sissi interview on social media did not fixate on Sissi’s comments, but rather the alleged demand that it not be aired.

“Why do autocrats consistently fail to grasp that trying to block access to information increases interest in that information and demonstrates that they are in fact autocrats?” Timothy Kaldas, a Cairo-based Egypt analyst with the Tahrir Institute for Middle East policy wrote on Twitter.