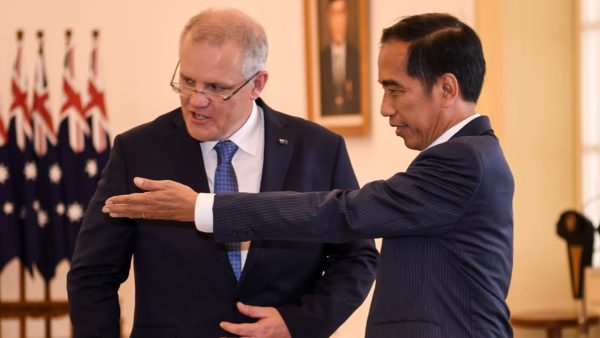 Government buckles amid backlash from Muslim-majority Indonesia and Malaysia

SYDNEY/JAKARTA — When Australian Prime Minister Scott Morrison decided to shelve a plan to relocate his country’s embassy in Israel from Tel Aviv to Jerusalem, he was concerned about the country’s relationship with its Asian neighbors, rather than with the Palestinians.

The confusion has highlighted the policy-making difficulties for a country growing more reliant on Asia.

“Fundamentally, it is the right of every country to determine its national capital,” Morrison told reporters in Sydney on Dec. 15.

A political source in Canberra said, “Morrison meant that Australia would not relocate its embassy in Israel for the time being.”

The city of Jerusalem is sacred to a number of religions, including Judaism, Christianity and Islam.

Many analysts said Australia’s decision to recognize West Jerusalem as Israel’s capital without relocating its embassy is in effect no more than a political message. But it immediately made a ripple as Malaysian Prime Minister Mahathir Mohamad criticized it the next day, saying countries had “no right” to do so, Reuters reported.

Plans to recognize West Jerusalem as Israel’s capital and relocate the Australian embassy were announced by Morrison four days before a by-election in the House of Representatives in October. At stake in the poll was whether the ruling conservative coalition of the Liberal Party and National Party could retain its majority.

The announcement, following the relocation of the U.S. embassy to West Jerusalem earlier in the year, was widely seen as an attempt to attract support from Jewish voters, who account for more than 10% of the constituency’s population.

But the strategy proved to be a major mistake as the coalition lost the seat and has left Australia nothing but friction with the Palestinian people, countries in the Middle East and Asian neighbors such as Indonesia.

Promoting Asia-oriented policies, Australia sees the CEPA as a trump card to boost its access to the growing market of Indonesia. Australia hoped to sign the CEPA in November, but the embassy relocation issue has led to a delay in sealing the accord.

There are some 1.6 billion Muslims around the world, more than half of whom reside in Asia. The Middle East has a much smaller number. Indonesia, where Muslims account for more than 90% of the population, is the biggest Muslim country in the world.

So it was a natural course of events that Australia’s plan to relocate its embassy from Tel Aviv to West Jerusalem has provoked a strong backlash from Indonesia and other Muslim countries such as Malaysia.

In mid-November, an Australian cabinet minister reportedly whispered to Indonesian Trade Minister Enggartiasto Lukita that the chances of relocating the embassy were less than 5%.

The report was taken as a sign that calls to drop the relocation plan were rapidly increasing within the Australian government, which has envisioned boosting exports of beef to Indonesia and advancing into its university education market after signing the CEPA.

Australia’s close ally the U.S. already relocated its embassy to Jerusalem in May. But Australia is in a different situation because its economy is affected by exports, said Kazuo Takahashi, professor emeritus at the Open University of Japan.

Under the circumstances, Morrison has shelved the relocation plan, prompting the Indonesian Foreign Ministry to appreciate it. But Israel, which regards the city of Jerusalem, including East Jerusalem, as its “inseparable and eternal” capital, has resented Canberra’s stance.

While Australia will hold a general election by the end of May next year, the support rating of the conservative coalition led by Morrison is low. Although Morrison plans to relocate the Australian embassy to West Jerusalem in the future, Daniel Flitton of the Lowy Institute for International Policy, an independent think tank based in Sydney, said, “for the moment it doesn’t appear likely Australia’s physical embassy location will shift,” adding that the plan will be discarded if the opposition Labor Party wins the election.

Professor Amin Saikal of the Australian National University and other domestic critics blamed Morrison for making “a mess of Australia’s Middle East policy.”