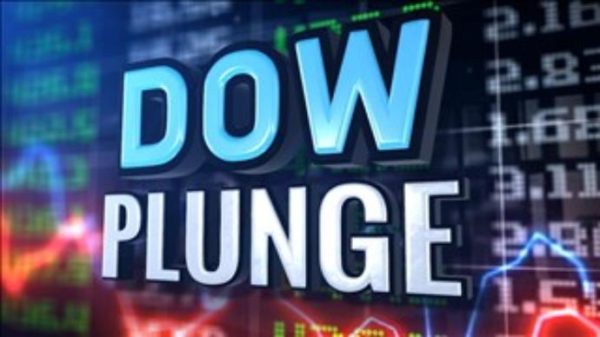 There was no holiday cheer on Wall Street on Monday.

With a shortened Christmas Eve trading session, and ahead of the Christmas holiday that will close U.S. stock markets Tuesday, investors wasted no time in sending the Dow Jones Industrial Average, and other leading stock-market gauges, into the red to continue what has been the worst December for U.S. stocks since the Great Depression.

Stocks went into the red within minutes of opening and never recovered. By the time the closing bell rang, the Dow had fallen 653.17 points, or almost 3 percent, to close at 21,792.20. The addition of those losses has shaved 15.5 percent from the blue chip market barometer since the start of December.

The market swoon has been fueled by growing fears over the health of the U.S. economy, the potential for more interest rate increases and a series of mixed corporate earnings reports heading toward the end of the year. A partial shutdown of the federal government hasn’t done much to allay people’s concerns about the outlook for the economy.

Adding to the market’s uncertainty was Treasury Secretary Steven Mnuchin, who spent part of Sunday on the phone with the chief executives of the nation’s six-largest banks–Bank of America, Wells Fargo, Morgan Stanley, J.P. Morgan Chase, Citi and Goldman Sachs–in an effort to get assurances that their institutions were fiscally sound.

“We continue to see strong economic growth in the U.S. economy with robust activity from consumers and business,” Mnuchin said in a statement posted on Twitter Sunday night. “With the government shutdown, Treasury will have critical employees to maintain its core operations at Fiscal Services, IRS, and other critical functions within the department.”

Sam Stovall, chief economist for CFRA Research, said while Mnuchin may have been trying to calm fears about the state of the nation’s economy, he instead raised more questions about what the government can do to settle investors’ rattled nerves.

“Hearing about Mnuchin (speaking to the bankers) has led to the impression that there is a liquidity crisis,” Stovall said. “And then you start thinking about what else don’t we know.”

President Donald Trump also got in on the action, railing on Twitter against the policies of Federal Reserve Chief Jerome Powell, and how he views the Fed’s role in impacting the economy and the stock market.

The only problem our economy has is the Fed. They don’t have a feel for the Market, they don’t understand necessary Trade Wars or Strong Dollars or even Democrat Shutdowns over Borders. The Fed is like a powerful golfer who can’t score because he has no touch – he can’t putt!

“The only problem our economy has is the Fed,” the president tweeted. “They don’t have a feel for the Market, they don’t understand necessary Trade Wars or Strong Dollars or even Democrat Shutdowns over Borders. The Fed is like a powerful golfer who can’t score because he has no touch – he can’t putt!”

The combination of the stock-market performance of late, concerns about economic uncertainty, and President Trump not being one to shy away from publicly voicing his anger and frustration with anyone in Washington, D.C. has left some market analysts practically throwing their hands up in the air at the whole scene.

“Another day, another triple digit fall, another Trump tweet. Can’t we all be friends for one day?” said Clement Thibault, senior analyst with Investing.com. “Its widely accepted that stock market returns have very little to do with who’s president, and everything to do with market cycles. I’m really not sure firing Powell or bashing the Fed will serve that goal. The market has never been a fan of uncertainty.”