Rubble and charred cars in former ISIS hub in Syria 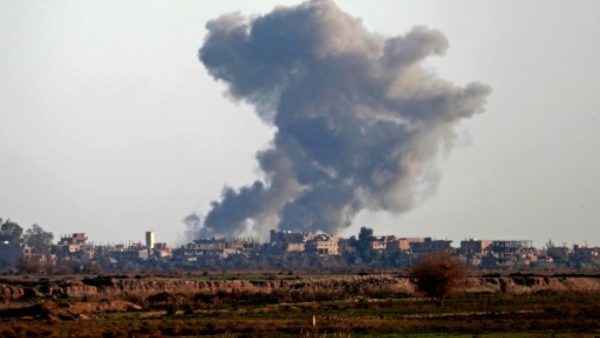 Burnt-out cars, craters and collapsed buildings dot the side of a road in the Syrian village of Hajin, after US-backed forces expelled the Islamic State group.

The sound of mortar fire and flying bullets resounded inside Hajin on Saturday, as huge clouds of grey smoke billowed over the outskirts of the large village in eastern Syria.

The yellow flag of the Syrian Democratic Forces flew above one building, after the Kurdish-led fighters seized the village from IS jihadists on Friday.

“Hajin has come under the control of our forces,” SDF commander Zanar Awaz said.

“We are now fighting on the outskirts of Hajin and we are preparing to enter nearby villages,” he said in Kurdish, a shot of white in his short black hair.

“We will finish off this terrorist group.”

Hajin lies on the east bank of the Euphrates in the eastern province of Deir Ezzor, about 30 kilometres (18 miles) from the border with Iraq.

The village’s capture marks a milestone in a massive and costly operation backed by a US-led coalition to expel IS from eastern Syria.

On Saturday, armoured vehicles brought in SDF fighters to reinforce the front lines outside Hajin, as coalition planes and helicopters flew overhead.

An SDF fighter sitting on the top of a vehicle with fellow combattants flashed a victory sign.

The Kurdish-led SDF launched an offensive in September to expel IS from a pocket including its main village Hajin, but their advance has been fraught with obstacles.

“We’ve been facing a lot of difficulties: IS car bombs, suicide attackers. Most of them are foreign,” Awaz said.

On Saturday morning, IS launched a counterattack, but the SDF said it succeeded in repelling them with the backing of coalition air strikes.

Since the start of the operation on September 10, at least 930 jihadists and more than 540 SDF fighters have been killed, the Britain-based Syrian Observatory for Human Rights war monitor said.

In addition, more than 320 civilians have lost their lives, many in coalition air strikes, according to the Observatory. The coalition has however repeatedly denied targeting civilians.

But no civilians were visible in Hajin on Saturday, after thousands fled the village and nearby areas.

A convoy of armoured cars ferried in US soldiers, churning up dust along the way.

On a hill that used to act as the village cemetery, tunnels and trenches dug by the jihadists lay covered in sheets and colourful blankets.

SDF fighter Bahouz, who did not give his last name, remembered first entering the district’s hospital.

He said he took pictures of the dead jihadists he saw there.

“They think they’ll go to paradise, but we killed them,” he said, carrying a gun and hand grenades around his waist.

“Death is their destiny as they destroyed everything.”

IS swept across large swathes of Syria and neighbouring Iraq in 2014, implementing their brutal interpretation of Islamic law in areas they controlled.

But they have since seen their dream of a state crumble, as they have lost most of that territory to various offensives.

In Syria, IS fighters are holding out in what remains of the pocket that once included Hajin, including the villages of Al-Shaafa and Sousa.

They have also retained a presence in the vast Badia desert, but that front is managed by Russia-backed regime forces.

According to the Observatory, a total of 17,000 SDF fighters are involved in the fight to seize the eastern pocket, compared to around 2,000 jihadists.

“There’s only a bit left” to capture from IS, said the 19-year-old.

“We will head on to Al-Shaafa and Sousa to liberate them and win, God willing.”