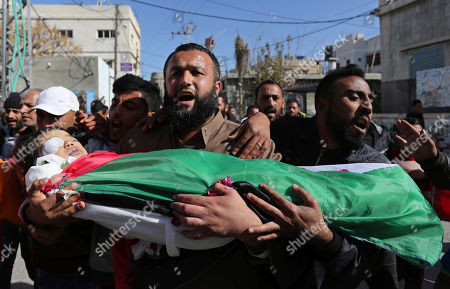 Mourners carry the body of four year old Palestinian boy Ahmed Abu abed, who died of his wounds which he sustained by Israeli forces during clashes in tents protest where Palestinians demand the right to return to their homeland at the Israel-Gaza border, during his funeral in Khan – 12 Dec 2018 Ahmed Abu Abed succumbed to wounds in Gaza after being injured by shrapnel during protests against Israel’s blockade.
Share:

Ahmed Abu Abed succumbed to wounds in Gaza after being injured by shrapnel during protests against Israel’s blockade.

A four-year-old Palestinian boy has died after being injured by Israeli gunfire at a routine protest near the fence with Israel, Gaza‘s health authorities said.

“Ahmed Abu Abed, aged four years and eight months, died as a result of wounds he received last Friday east of Khan Younis,” al-Qudra said in a statement on Tuesday.

Ahmed’s father, Yasser Abu Abed, told Al Jazeera his son was injured by shrapnel when he was shot during regular Friday protests, dubbed the Great March of Return.

Yasser is a father to four other children and has been unemployed for the past seven years. According to him, Ahmed, who was the youngest among his siblings, insisted on joining his father on December 10.

“I never used to take him with me,” Yasser, who regularly attends the Friday demonstrations, said. “We’re simply asking for basic rights.”

Israeli snipers began shooting at the Palestinians as soon as they arrived at the scene, in the most “random manner”, Yasser said.

“We were a few hundred metres away from the fence when the Israeli soldiers started firing at us. It felt more like a bomb, so loud and frightening,” he said.

While Yasser was shot in the arm, Ahmed suffered injuries from shrapnel in his stomach, neck and right eye, which affected his brain and central nervous system. He spent four days in intensive care before he succumbed to his wounds.

“It all happened so fast. From the moment we arrived until the moment we were shot at, only less than two minutes had passed,” he said.

“All we ever wanted was to see the blockade on Gaza come to an end”.

The Israeli army said on Wednesday it was reviewing the incident while accusing Hamas– the group governing the Gaza Strip – of using residents as cover for attacks, local media reported.

The killing of four-year-old Ahmed follows months of demonstrations by Palestinians in Gaza along the fence with Israel, demanding their right to their ancestral lands from which they were expelled 70 years ago.

The Great March of Return rallies culminated on May 15 to mark what Palestinians refer to as the Nakba, or Catastrophe – a reference to the forced removal of 750,000 Palestinians from their homes and villages to clear the way for Israel’s establishment in 1948.

So far, more than 195 Palestinians have been killed in Gaza, one of the most densely populated places on earth.

Two Israeli soldiers have been killed since the protests began on March 30.

Ahmed’s mother, Ikram Abu Abed, said her son only ever lived in poor conditions under the Israeli siege.

“I was hoping one day to give my children a better life,” Ikram, who is expecting, told Al Jazeera.

“When we enrolled him in a nursery we had to take him out just two months later because we couldn’t bear the expenses any more,” she said.

“He was always a good boy. These past few weeks, in particular, he was cheerful and playful with everyone around him,” she said tearfully.

“It’s as if he was saying goodbye.”

In September, seven protesters were killed by Israeli gunfire, including two boys aged 12 and 14.

It was the bloodiest day since May 14 when more than 60 Palestinians were killed in Gaza during protests against the inauguration of the US embassy in Jerusalem.