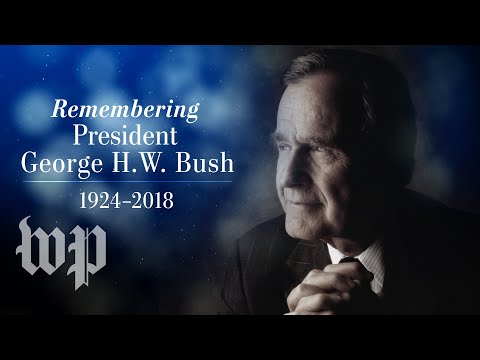 In a rare moment of national unity, President Trump, four former presidents and a mass of national and international leaders were gathering at the soaring National Cathedral Wednesday morning to honor former President George H.W. Bush.

The Bush family marched out of the cathedral, trailing behind the casket of the former president as a military honor guard carried him to a hearse, around 1:20 p.m., concluding a warm ceremony marked by both tears and laughter.

A military band played Hail to the Chief and Holy God, We Praise Thy Name.

Bush’s casket was to fly to Houston, and then be transported by train to his burial place at Texas A&M University in College Station, Texas. His body will make the roughly 70-mile trip between Houston and the school on a train pulled by a locomotive called “Bush 4141,” unveiled in his honor in 2005 and painted to resemble Air Force One.

Crowds are expected to gather to see the train pass, echoing national funerals of years past. Bush’s burial is scheduled for Thursday afternoon.

George W. Bush: “The best father a son or daughter could have”

Former President George W. Bush delivered a eulogy for his father that mixed laughs and caring and nearly brought him to tears.

“The last words he would ever say on earth were ‘I love you, too,’” the younger Bush said, recounting their final conversation, by phone.

He described his father’s love of off-color jokes and his poor putting in golf, but also his love for his family, faith, setbacks and kindness.

“He was no cynic, he looked for the good in each person, and he usually found it,” Bush said. “Dad taught us that public service is noble and necessary.”

Bush said his father learned to love life because he almost died young twice: first as a teenager with a staph infection, and later as a Navy pilot shot down during World War II. He golfed fast “so that he could move on to the next event … to live it all,” Bush said.

And he recalled his father’s prayers for Robin, the daughter who died of leukemia at the age of three.

“Dad always believed that one day he would hug his precious Robin again,” Bush said.

As he concluded, he nearly broke down in tears as he called the 41st president “the best father a son or daughter could have.”

“Dad is hugging Robin and holding mom’s hand again,” Bush concluded. He tapped his father’s coffin as he walked back to his seat, still near tears. As he sat, his brother Jeb reached out, and grasped his hand.

Former Sen. Alan Simpson, Republican of Wyoming, recalled the tense moment late in the presidency when bipartisan congressional negotiators came up with a budget deal that would help restore solvency to the nation – except, the House and Senate leaders said, they’d need some revenue. Bush, of course, had famously promised “read my lips,” no new taxes during his campaign. “He paused and said, ‘What I’ve said on that subject sure puts a hell of a lot of heat on me…OK, go for it, but it will be a punch in the gut,’” Simpson recalled. And, he said, Bush never looked back, even though the decision “hastened his return to private life….He often said, ‘When the really tough choices come, it’s the country, not me.’”

That was just one illustration, Simpson said, why the 41st president’s epitaph is “perhaps a single letter, L, for loyalty.”

Former Canadian Prime Minster Brian Mulroney hailed Bush’s leadership on the international stage — citing the former president’s steady hand during the disintegration of the communist bloc and his work to build a coalition during the first Iraq War.

The collapse of the Soviet Union, Mulroney said “was in my judgment the most epochal event, political event, of the 20th century, an ominous situation that could become extremely menacing to world security.” Instead, he said in a tribute, Bush helped usher in the “broad and powerful currents of freedom.”

He said the unity that won the first Iraq War “will rank with the most spectacular and successful international initiatives ever undertaken in modern history.”

“When George Bush was president of the United States of America, every single head of government in the world knew that they were dealing with a gentleman, a genuine leader,” Mulroney said.

Historian Jon Meacham, delivering the first tribute to Bush, recalled the seminal event in his life, when the future president’s plane was shot down in the South Pacific during World War II, and two crewmates were killed.

“In a sense, the rest of his life was a perennial effort to prove himself worthy of his salvation on that distant morning. To him, his life was no longer his own,” said Meacham, who wrote a Bush biography. “And what a headlong race he made of it all.”

Meacham also recounted Bush’s foibles, drawing laughs and knowing nods from the former president’s children. He recalled his fumbling syntax, and how comedian Dana Carvey once described his Bush imitation as “Mr. Rogers trying to be John Wayne.” He also noted the hard-edged tactics Bush could use in politics, saying the president acknowledged that politics “isn’t a pure undertaking, not if you want to win.”

But he said Bush, though imperfect, ultimately showed his deep caring for others.

“A lion who not only led us, but who loved us,” Meacham said. “That’s why him. That’s why he was spared.”

The late president’s casket was marched down the central aisle of the cathedral in a solemn proceeding just before 11:30 a.m., the only sounds the squeaking of the dress shoes of the military honor guard, an officer quietly calling cadence, and muffled coughing. After it was placed before the altar, the Very Rev. Randolph Marshall Hollerith, dean of the cathedral, prayed over the body the Collect for Burial from the Episcopal Church’s Book of Common Prayer, the psalter from which George H.W. Bush’s mother read to him when he was a child.

“O God, whose mercies cannot be numbered: Accept our prayers on behalf of your servant George, and grant him an entrance into the land of light and joy, in the fellowship of your saints; through Jesus Christ our Lord, who lives and reigns with you and the Holy Spirit, one God, now and forever,” Hollerith said.

Former President George W. Bush led the former president’s children and their spouses into the cathedral around 11:20 a.m. He went to the pew filled by President Trump, First Lady Melania Trump and four other presidents and first laides — the Obamas, Clintons and Carters — and greeted them each in turn.

The military honor guard slowly marched the elder Bush’s casket up the aisle of the hushed cathedral.

Bush appeared to hand something to Michelle Obama, in an apparently light reminder of a warm moment at Sen. John McCain’s funeral in September, when Bush playfully snuck a candy to her.

The Bush family, in dark suits, black dresses and overcoats, gathered on the sweeping plaza outside the U.S. Capitol around 10:20 a.m. as a military honor guard slowly carried the former president’s flag-wrapped casket from the building’s rotunda into a hearse. Former President George W. Bush, the son of George H.W. Bush, visibly fought tears as a military band played “Hail to the Chief” one more time for his father. Nearby canons fired in salute.

Under low, gray skies, the Republican and Democratic leaders of the Senate and House stood together to watch in unison. The coffin was to be taken to the cathedral, past thousands of people who had lined the cold Washington streets to watch and pay respects.

As Trump arrived, he shook hands with both Obamas. He and First Lady Melania Trump sat alongside the Obamas, Clintons and former President Jimmy Carter and Rosalynn Carter in the front row.

“Looking forward to being with the Bush family. This is not a funeral, this is a day of celebration for a great man who has led a long and distinguished life,” Trump tweeted Wednesday morning.

Memorials to Bush since his death Friday have evoked memories of a less divisive, caustic era, and Wednesday’s funeral came with the prospect of Democratic and Republican presidents sitting side-by-side in the pews. Trump was expected to sit near Barack Obama and Bush’s son, former President George W. Bush, both of whom he has excoriated in the past.

Trump, however, has praised the 41st president since he died at the age of 94, and has extended courtesies to the Bush family despite testy relations with the family, including inviting them to stay at the Blair House, the presidential guest accommodations across Pennsylvania Avenue from the the executive mansion.

The event will cap a week of mourning in Washington before Bush’s body is flown to Texas, where he will be buried next to his wife, Barbara, and daughter Robin at Texas A&M University, home to the George Bush Presidential Library and Museum.

The funeral comes just three months after a national outpouring for the late Sen. John McCain, who died in August and whose services effectively morphed into a national rally for dignity, respect and character — and an explicit rebuke to Trump. Many of those same themes have coursed through the remembrances and ceremonies honoring Bush. Unlike with McCain, though, there have been no direct contrast with Trump or efforts to exclude the current president. (It is unusual, however, for a sitting president not to be invited to give a eulogy).

Bush’s body lay in state in the U.S. Capitol from Monday afternoon through Wednesday morning, drawing a steady stream of mourners and well-wishers who visited the casket beneath the Capitol rotunda.

Lori Steele visited wearing a maroon-and-white Texas A & M scarf — her husband works as an administrator at the university, which hosts the elder Bush’s library. She said he embodied the seven core values listed in the school’s purpose statement: excellence, integrity, leadership, loyalty, respect and selfless service.

“This is one president that held them all,” said Steele, 59, of Bowie, Md. She said she had been to several events attended by the former president and his late wife, Barbara Bush. “He’s such a family man, you feel like you know him even if you don’t.”

“Both of us considered him one of the best presidents of our time,” said Outlaw, 55. “He was a people’s president — he respected the office.”

Archie Bates, a 50-year-old former Army acquisition officer, came to pay tribute to a fellow military man. Bush was a highly decorated Navy pilot in World War II who was shot down during the Pacific campaign to liberate Japanese-held islands, but rarely talked about his experiences there.

Bush would go on to decades in public life. He was a congressman, ambassador to the United Nations, liaison to China, director of the Central Intelligence Agency, vice president and then president. He lost reelection to Democrat Bill Clinton in 1992, but would later form a partnership with his one-time rival. Together they raised money for disaster relief after Hurricane Katrina and became co-chairmen of the National Institute for Civil Discourse.

He was the last member of his generation to have served as president, and was widely remembered this week for his calm and dignified demeanor, a sharp contrast to the fury that has come to define U.S. politics in the nearly three decades since he left office.