“I am worried “, “You never listen to me” : Macron tells Saudi Crown Prince MbS at G20 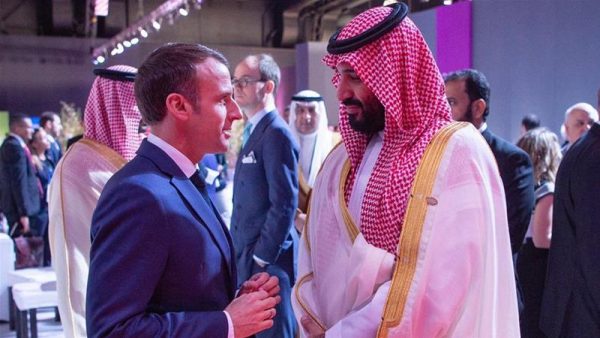 The Saudi crown prince, Mohammed bin Salman, suspected of ordering the murder of the dissident writer Jamal Khashoggi and accused of war crimes in the Yemen conflict, has told the French president, Emmanuel Macron, “Don’t worry” at the G20 summit in Buenos Aires.

The two leaders were having an informal conversation on the sidelines of the summit, standing close together and apparently unaware their conversation was being recorded. The subject of the snatched conversation was not immediately clear but a French presidential aide said afterwards that the Khashoggi murder and the Yemen conflict were the two key topics of the short exchange.

According to a Guardian analysis of their only partly audible conversation, Macron replies to the crown prince’s assurances: “I do worry. I am worried … I told you.”

“You never listen to me,” Macron says.

“No, I listen, of course,” replied Prince Mohammed, smiling broadly after apparently becoming aware of a television camera.

“Because I told you. It was more important for you,” Macron says, and gives a tight smile, before turning away from the camera to speak further to the prince.

Macron then says something inaudible, to which the Saudi leader says: “It’s OK. I can deal with it.”

After another indecipherable segment of conversation, Macron says: “I am a man of my word.”

The Élysée Palace said the two leaders had a five-minute exchange on the sidelines of the summit in which Macron conveyed a “very firm” message to the prince over the killing and the need to find a political solution for the situation in Yemen.

The Saudi prince’s decision to attend the G20 summit in Buenos Aires represented a calculated risk, as it was unclear whether the other leaders would condemn him. Many of his closest aides and security staff were involved in Khashoggi’s murder on 2 October in the Saudi consulate in Istanbul, and the CIA has reportedly assessed that the prince gave the order for the execution.

The results of the 33-year-old Saudi leader’s gambit were mixed at the start of the two-day summit. Macron and the UK’s prime minister, Theresa May, agreed to meet him. May insisted she had strong words to convey about the Khashoggi murder and the need for a full accounting of Riyadh’s alleged involvement.

During a group photo marking the start of the summit, the prince stood at the far edge of the group, largely ignored and left alone as soon as it was over. But a few minutes later, Vladimir Putin greeted the Saudi prince warmly, giving him a high five as they sat down together at the large ring-shaped table for the first group session.

Putin also came to the Argentinian capital fighting pariah status after an incident in the Azov Sea on Sunday in which Russian vessels rammed a Ukrainian tugboat and opened fire on two small Ukrainian navy cutters it was accompanying.

Russian forces seized the vessels and their crew and Moscow’s refusal to return them was the reason Donald Trump offered for his decision to cancel a bilateral meeting with Putin, which had been planned for Friday morning.

As Russian actions in the Sea of Azov had been known for days, there was speculation in Washington that the real reason for the change of mind was the court appearance of Trump’s former lawyer, Michael Cohen, on Thursday in which he pleaded guilty to lying to Congress about the extent and duration of negotiations with the Kremlin about a possible Trump hotel in Moscow, continuing up to July 2016, at the height of the presidential election campaign.

Trump, whose campaign is being investigated for its alleged links to the Kremlin, had denied any business dealings in Russia.

On Friday, Russian media reported that Trump and Putin would meet informally at the fringes of the full G20 summit, but a White House official said no such “pull aside” had been scheduled.

There was similar uncertainty over whether Trump would meet the Saudi crown prince, whom the president has supported in the face of US intelligence findings of his alleged culpability in the Khashoggi murder. The administration also suffered a significant rebuke from the Senate, which ignored the urging of top Trump officials and refused to shelve a debate on whether to cut US military support for the Saudi-led military campaign in Yemen.

The Saudi-owned broadcaster Al Arabiyah reported that the crown prince and Trump had held a “friendly meeting” on the sidelines of the summit, but the White House said the encounter only amounted to an exchange of pleasantries, similar to the US president’s greeting with every other leader.

Before arriving in Buenos Aires, Trump had declared himself willing to meet the crown prince, while his national security adviser, John Bolton, ruled it out, saying there was no room in the president’s schedule. The US secretary of state, Mike Pompeo, met his Saudi counterpart, Adel al-Jubeir, separately in a meeting that a statement said was focused on planned Yemen peace talks next week, “as well as the importance of making progress on the investigation into Jamal Khashoggi’s death”.

On leaving the meeting, the Saudi foreign minister described it as “very productive”, saying they have discussed “challenges in the region and the bilateral relationship and ways of moving it forward”. Asked if they had also discussed Khashoggi, he did not reply.

Trump began the day by attending a signing ceremony for a new trade agreement with Mexico and Canada, the USMCA, to replace the 1994 North American Free Trade Agreement (Nafta). .

Just signed one of the most important, and largest, Trade Deals in US and World History,” Trump announced in a tweet. “The United States, Mexico and Canada worked so well together in crafting this great document. The terrible NAFTA will soon be gone. The USMCA will be fantastic for all!”

Experts say the USMCA is a slightly tweaked and updated version of Nafta, which Trump has persistently pilloried. In his own remarks the Canadian prime minister, Justin Trudeau, repeatedly referred to the deal as “the new Nafta”, a formulation he must have known would annoy the prickly US president.

The leaders began the summit without Germany’s chancellor, Angela Merkel, whose plane had broken down on the way to Argentina and who was making her way to Buenos Aires on commercial flights, leaving May the only female leader at the meeting.

As the proceedings began, it was unclear whether the participants would be able to agree on a final statement as the US had objected to some of the draft language on free trade and the need for multilateralism. The statement had not been settled by Friday afternoon, according to diplomats at the summit.

Referring to some of the difficulties in finding even the most basic common language, the European council president, Donald Tusk, told journalists: “As this is a difficult moment for international cooperation, I would like to appeal to the leaders to use this summit, including their bilateral and informal exchanges, to seriously discuss real issues such as trade wars, the tragic situation in Syria and Yemen and the Russian aggression in Ukraine.”

“I see no reason why the G20 leaders shouldn’t have a meaningful discussion about solving these problems. Especially because all the instruments lie in their hands,” Tusk said. “The only condition is goodwill.”