Trump: U.S. will hold off on steeper tariffs after meeting with China’s Xi Jinping 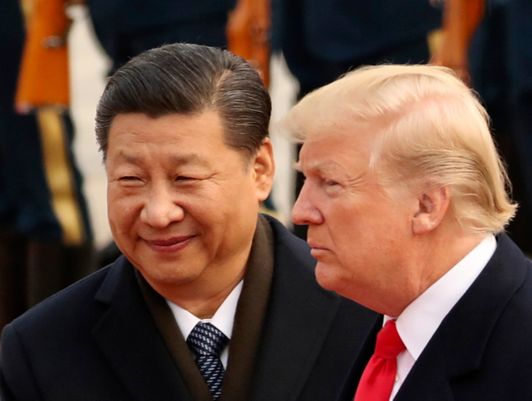 President Donald Trump’s administration said Saturday it will temporarily hold off on a new round of tariffs aimed at China, the first signal of a possible truce after months of escalating trade tension between the two nations.

The announcement came after Trump and Chinese President Xi Jinping met for more than two hours over a steak dinner at the G-20 summit in Argentina, an encounter closely watched by investors and world leaders for signs of a break in the trade battle.

In a departure from the hard line stance Trump had taken with China for most of the year, the White House said it would suspend for 90 days a 25 percent tariff that had been set to take effect next month on $200 billion in Chinese goods. The administration left open the possibility of raising those tariffs if no deal is worked out in coming months.

As he flew back to Washington from Buenos Aires, Trump issued a statement from Air Force One calling his meeting with Xi “amazing and productive.”

The White House also said China had committed to purchase “a not yet agreed upon, but very substantial” amount of products from the United States. In that sense, Trump appeared to be announcing a loose agreement on trade similar to the one he struck with the European Union earlier this year.

Details of exactly what the two leaders agreed to were sparse. Trump left the dinner with Xi and quickly boarded his plane, declining to speak with reporters. Larry Kudlow, the president’s top economic adviser, said only that the meeting went “very well.”

The meeting, the first face-to-face encounter between Trump and Xi in a year, offered the best chance for a truce between Washington and Beijing after the two countries spent months imposing higher tariffs on each other’s exports. White House officials sent only guarded signals ahead of time about its chances.

Trump appeared to express cautious optimism as he opened the dinner. Sitting across from Xi at an ornately decorated, rectangular table, Trump told reporters that the two nations would “probably” wind up with a deal, eventually.

“We’ll be discussing trade and I think at some point we’re going to end up doing something that’s great for China and great for the United States,” Trump said, largely echoing the unspecific confidence he has projected for months.

In his own opening remarks, Xi did not address trade directly.

“Only with cooperation between us can we serve the interest of both peace and prosperity,” he said through a translator.

The dinner capped Trump’s relatively short trip to Buenos Aires for the G-20 summit, where the White House hoped to highlight the president’s efforts on trade. His visit was instead largely overshadowed by the plea deal struck by his former attorney, Michael Cohen, and the death of former President George H.W. Bush.

Trump also signed a new trade agreement with Canada and Mexico, fulfilling a campaign pledge to renegotiate the controversial NAFTA deal. And his administration appeared to secure a win in a joint statement summarizing the meeting signed by all 20 countries that acknowledged the need for reform of the World Trade Organization.

The White House had longed argued that the U.S. has been treated unfairly in WTO dispute resolutions.

The trade dispute with China escalated over the summer when Trump slapped the first round of tariffs on Chinese imports in response to what he and others have said are Beijing’s unfair trade practices, including the theft or forced transfer of intellectual property from U.S. businesses.

Trump had already levied tariffs on $250 billion in Chinese goods. Some of those tariffs had been scheduled to increase on Jan. 1 to a rate of 25 percent, up from the current level of 10 percent. That increase, the White House, said would be pushed back to give the two sides more time to negotiate.

In the days leading up to the summit, White House officials appeared to be ratcheting up the pressure on China, or potentially lowering expectations for a deal. Trump and others signaled that they saw little sign Beijing was offering to make substantial changes to its own trade barriers.

U.S. Trade Representative Robert Lighthizer said China’s “aggressive, state-directed industrial policies” are causing severe harm to U.S. workers and manufacturers earlier in the week. The U.S. continues to raise those issues with China, Lighthizer said, but so far China “has not come to the table with proposals for meaningful reform.’’

The potential fallout from a full-blown trade war between China and the United States would almost certainly impact the economy beyond those two nations. German Chancellor Angela Merkel, who also met with Trump Saturday, encouraged the president and Xi to reach an agreement.

“All of us see that we are affected indirectly when Chinese-American economic relations are not as frictionless as a world order requires,” she said.