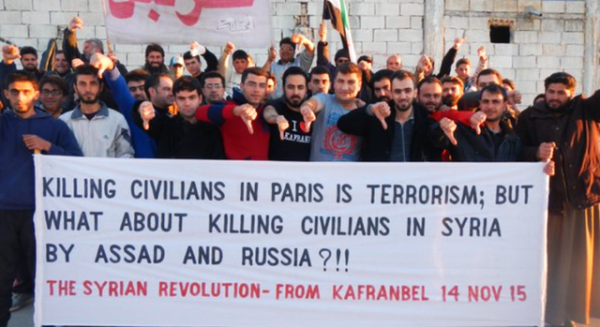 RAED al FARES ( center in blue T shirt ) is no stranger to confrontation. Since the very beginning of the uprising against President Bashar al-Assad in Syria, he has been at the forefront of a rebellion calling for freedom of speech and democratic values.
Share:

PARIS – French President Emmanuel Macron on Sunday praised the courage of Raed al-Fares, a prominent activist who was gunned down along with his friend Hamoud al-Juneid in Syria on Friday.

Fares was a pro-democracy activist who ran a radio station in Idlib, northwestern Syria, that provided independent news and satirized both President Bashar al-Assad and opposition insurgents.

The British-based Syrian Observatory for Human Rights said unidentified gunmen shot and killed Fares, along with his friend Hamoud al-Juneid, in Kafranbel, home to his Radio Fresh station.

“Raed al-Fares and Hamoud al-Juneid were killed in a cowardly way. They were the conscience of the revolution and peacefully stood up against the crimes of the regime and terrorists. We will not forget the resistants of Kafranbel,” Macron said on Twitter.
(Reuters)