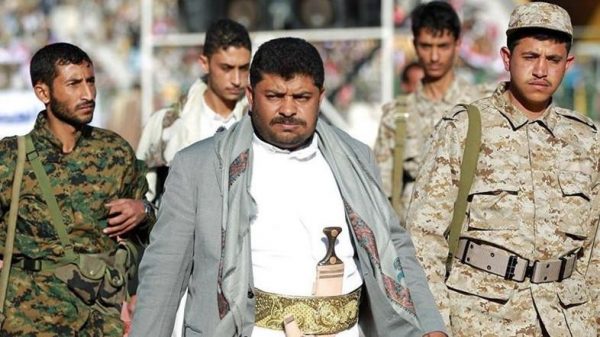 Mohammed Ali al-Houthi is the head of what’s called the Supreme Revolutionary Committee of the Houthi militias
Share:

Mohammed Ali al-Houthi, a leader of the Houthi movement, announced on Sunday that he is ready to institute a ceasefire, so long as the Saudi-led coalition battling his militia in Yemen is prepared to do the same.

“We are willing to freeze and stop military operations on all fronts to reach a just and honorable peace if they really want peace for the Yemeni people,” al-Houthi, head of Yemen’s Houthi Supreme Revolutionary Committee, said in a statement.

Al-Houthi also said that his forces would stop launching missiles and drone attacks on “US-Saudi aggression countries and their allies in Yemen.” The United States has backed the Saudi-led coalition in its fight to expel Iranian-aligned Houthis from the Gulf country.

In a gesture of goodwill, al-Houthi called on Houthi forces to refrain from attacks.

“We announce our initiative and call on the official Yemeni (Houthi) authorities to stop the firing of missiles and unmanned aircrafts on the US-Saudi aggression countries and their allies in Yemen to drop any justification for their continued aggression or siege,” he said.

On October 30, US Secretary of Defense James Mattis and the US State Department called on the participants in the conflict in Yemen to agree to a ceasefire “in the next 30 days.”
“Thirty days from now we want to see everybody around a peace table based on a ceasefire, based on a pullback from the border and then based on ceasing dropping of bombs that will permit the (UN) special envoy, Martin Griffiths — he’s very good, he knows what he’s doing — to get them together in Sweden and end this war,” Mattis said at an event at the US Institute of Peace in Washington.
His call was later echoed by Secretary of State Mike Pompeo, who issued a statement saying, “The United States calls on all parties to support UN Special Envoy Martin Griffiths in finding a peaceful solution to the conflict in Yemen.”
“Substantive consultations under the UN Special Envoy must commence this November in a third country,” Pompeo added.
Mattis said the talks should lead to the implementation of “confidence-building measures to address the underlying issues of the conflict, the demilitarization of borders and the concentration of all large weapons under international observation.”
The Trump administration has been criticized by activists and some members of Congress for its support for the Saudi-led coalition fighting the Houthis in Yemen, and for the administration’s recent finding that the coalition wasn’t doing enough to avoid civilian casualties.
Earlier this month, the US announced that it would no longer refuel Saudi aircraft conducting strike missions over Yemen. The move was expected to have minimal impact on the Saudi effort because the United States was only providing refueling for some 20% of Saudi aircraft.
The US military also provides the Saudi coalition with training meant to help minimize civilian casualties, as well as with intelligence to help guard against Houthi cross-border missile and drone attacks.
Last week, the Saudi-led coalition agreed to the evacuation of wounded Houthi fighters from Yemen, the British Foreign Office said, hailing it as a breakthrough toward getting a new round of peace talks. The announcement was made following a visit of Foreign Secretary Jeremy Hunt to Saudi Arabia and the UAE to discuss the ongoing conflict.
David Miliband, the president and CEO of the International Rescue Committee, had called Pompeo’s statement “the most significant breakthrough in the war in Yemen for four years.”
“It is vital that this call for a ceasefire is followed through, and the call for support for the political process heeded,” Miliband added.
The conflict, which began in early 2015, has sparked a humanitarian crisis. Eight million people are on the brink of famine, according to the Norwegian Refugee Council. UN officials say that number may quickly rise to more than 12 million — about half of Yemen’s population — unless the fighting stops.
CNN
Share: