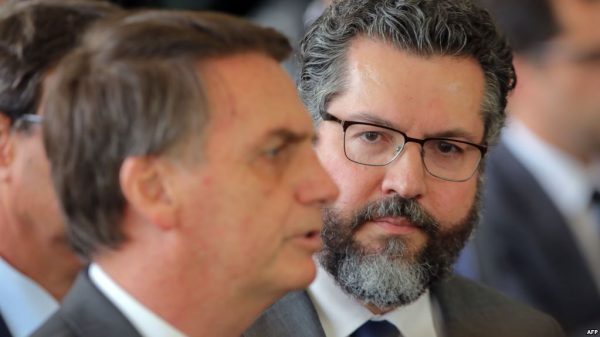 Bolsonaro’s pick of career diplomat Ernesto Araujo, 51, underscored Brazil’s sharp turn to the right and the reversal of nearly a decade and a half of diplomacy under leftist Workers Party governments that focused on alliances with South American allies and ideological partners – including Cuba.

“Brazil’s foreign policy should be part of this moment of regeneration that Brazil is living right now,” Bolsonaro, a longstanding Trump admirer, wrote on Twitter.

In another sign of Brazil’s new foreign policy direction under Bolsonaro, the former army captain announced he would grant asylum to any Cuban national who asks for it. That came after Cuba said it would pull thousands of its doctors from Brazil after Bolsonaro questioned their training and demanded changes to their contracts.

Araujo, a career diplomat, is currently head of the foreign ministry’s United States and Canada department. Last year, he raised eyebrows in the foreign ministry with an article that stated Brazil has a chance to recover its “Western soul” by embracing Trump’s brand of nationalism and pursuing its own interests instead of being tied to blocs of countries.

The article, entitled “Trump and the West,” won the attention of Bolsonaro, who has promoted the mid-level diplomat to lead Itamaraty, as the foreign ministry is known.

Araujo shares Bolsonaro’s view of the need to rethink membership of the South American trade bloc Mercosur, which he and others in the president-elect’s camp see as holding back Brazil’s commercial interests.

Announcing the appointment with Araujo at his side, Bolsonaro said the diplomat’s mission will be to promote trade with all nations without any left-wing ideological bias.

Araujo said he would make sure Bolsonaro’s election brought a change of course at the foreign ministry that puts Brazil first, “an effective policy based on national interest, a policy for an active, happy and prosperous Brazil.”

Araujo argued in his article that, unlike European leaders, Trump is saving western Christian civilization from radical Islam and “globalist cultural Marxism” by standing up for national identity, family values and the Christian faith.

Bolsonaro, who takes office on Jan. 1, is reconsidering some of his campaign foreign policy stances, such as copying Trump’s decision to pull out of the Paris Accord on climate change and moving Brazil’s embassy in Israel to Jerusalem. The latter proposal has already soured ties with Arab nations that are valuable markets for Brazilian meat.

But he has stuck to his criticism of a program that brought 14,000 Cuban doctors to practice in poor and remote parts of Brazil, slamming the “slave labor” terms under which Cuba’s communist-run government gets 75 percent of their salaries.

Bolsonaro has also insisted that Cuba allow the doctors’ families be allowed to join them in Brazil for the program to continue.

“Unfortunately, Cuba did not accept,” Bolsonaro said in a Twitter post announcing the end of the program after the Cuban health ministry said it was pulling its doctors out of Brazil due to his criticism.