Several more students were injured in the incident near the Dead Sea, said an official from the civil defense, Jordan’s fire service, who asked not to be named.

The bus was carrying 37 students and seven members of staff to the Zara Maeen hot springs area when it was washed away, officials said.

“Heavy rains caused a flash flood close to the Dead Sea that washed away a school bus carrying 37 students and seven minders,” the official said.

Rescue workers were continuing to search for survivors, he said.

“The students were on a school trip and it appears that a mudslide along the road swept their bus away,” the official said.

Israel’s military said it was helping with the operation, sending helicopters and search and rescue soldiers.

“Currently assisting Jordan in rescuing a bus full of children swept away in a flood on the Jordanian side of the Dead Sea,” it wrote on Twitter.

Details of the victims have not been released although an education ministry official said the students were from a private school, the Jordan Times reported.

The official, who was not named, expressed surprise that a school trip had been organised despite weather warnings.

Heavy rain has been sweeping the region for several days. Some streets in the Jordanian capital, Amman, have been inundated, leading to traffic jams, while large hailstorms have been reported elsewhere.

The Dead Sea, the lowest point on the earth, is surrounded by steep valley slopes that frequently witness flash floods and landslides.

Thursday’s incident is the second tragedy resulting from flash flooding near the Dead Sea this year.

In April, nine teenage hikers were swept away and killed in Nahal Tzafit, southern Israel. Another 15 were rescued. 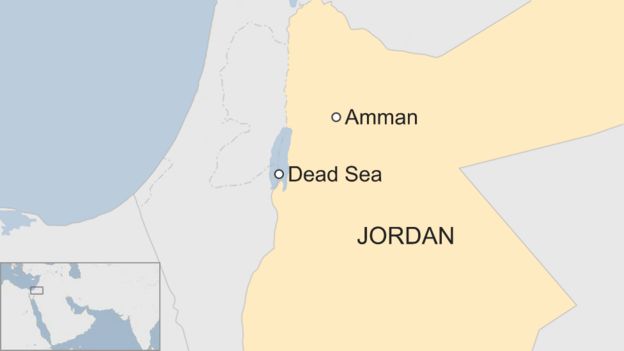