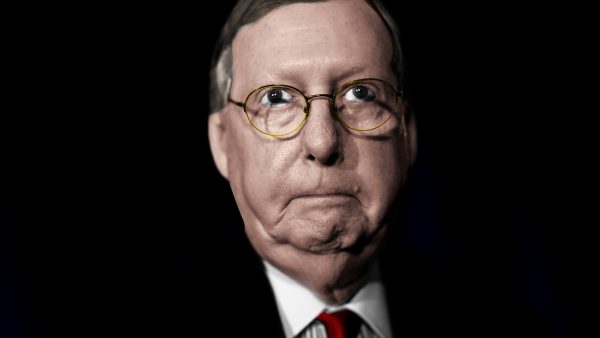 Senate Majority Leader Mitch McConnell has a message for Republican voters who are celebrating the confirmation of Supreme Court Justice Brett Kavanaugh: Get to the polls in November if you want more conservatives sitting on judicial benches.

“Lose the Senate, and the project of confirming judges is over for the last two years of President Trump,” McConnell said in an interview with NPR in his Capitol Hill office. “That, I think, is a scary prospect to the people who like what we’ve been doing on the judge project and I hope will help us hold on to our majority.”

All that turned around when Republicans grew frustrated with the protracted battle over Kavanaugh. The Kentucky Republican said it awakened them to the Supreme Court cause — an issue that inspired many of the same voters to back Trump in 2016.

“As of the last week or so the hottest issue in our races has [been the] Kavanaugh nomination,” McConnell said, even outpacing tax reform, which the top Senate leader listed as a major legislative accomplishment. “We knew the Democrats were fired up. They have been all year. No question about that.”

“But what we are now seeing is that the enthusiasm and energy on the Republican side comes close to matching the Democratic side, and given the states that we’re competing in, that’s really good news for us,” he said.

McConnell also called activists opposing Kavanaugh a “mob” and criticized Democrats for encouraging their actions. He said Republicans were inundated with protesters in recent weeks and had their lives disrupted.

“We were literally under assault ourselves,” McConnell said. “Trailing members for their homes; getting in their faces here in the Capitol. An effort clearly to try and intimidate us. And one of the reasons I was so proud of the result last Saturday on Judge Kavanaugh is that we stood up for two things. We stood up to the mob and we also stood up for the presumption of innocence in this country.”

He also rejected any comparison between those protesters and the conservative Tea Party activists who protested the 2010 passage of the Affordable Care Act or the raucous crowds that chant “lock her up” and jeer at reporters at many of Trump’s own campaign rallies.

Democrats say the Kavanaugh fight was equally energizing for their voters and for women in particular. At the same time, Republicans are losing support among women in addition to already low numbers among Hispanic and African-American voters.

“We’ve always had something of a gender gap,” McConnell said. “It’s never been as wide as it is now.”

He said he hopes electing qualified women to the Senate, like Marsha Blackburn in Tennessee and Martha McSally in Arizona, will help close that divide. He also pointed to Hispanic Republicans like Sens. Ted Cruz, R-Texas, and Marco Rubio, R-Fla., as evidence of diversity within the GOP ranks, but he noted that attracting black voters has been a bigger challenge.

“I think we can improve our position with women voters and with Hispanic voters for sure,” he said. “With African-Americans, we haven’t been able to make much headway.”

He did point to Sen. Tim Scott, the first African-American senator elected in South Carolina, as a “noteworthy” addition to the GOP conference.

“He’s arguably the most popular politician in South Carolina,” McConnell said. “So there is hope with African-American voters as well. But I’m more optimistic about closing the gender gap and by improving our position with Hispanics.”

Several key issues Republicans once touted as the central themes for the midterm elections have faded in recent weeks. McConnell says tax reform remains one of his top accomplishments, despite the fact that it is playing a smaller role in campaigns this year, and has been eclipsed by the Supreme Court debate.

The GOP message on health care has also shifted. Gone are the days of candidates vowing to repeal and replace the Affordable Care Act. Now Republicans are actively embracing protections for people with pre-existing conditions — a central tenet of the law they all opposed.

McConnell sidestepped whether Republicans would take another run at rolling back Obamacare next year after failing to get the votes for their scaled down repeal legislation. He called that failed effort “the single biggest disappointment this Congress and really the only major disappointment” after moving bills through “on so many different fronts.”

The top Senate Republican distanced himself from the unusual public criticism that President Trump leveled of the Federal Reserve Bank’s economic policies. Trump said the Fed had “gone crazy” for raising interest rates.

McConnell instead said of his own posture on monetary policy, “I generally avoid commenting on the market. It goes up and it goes down. Or giving the Fed advice.”