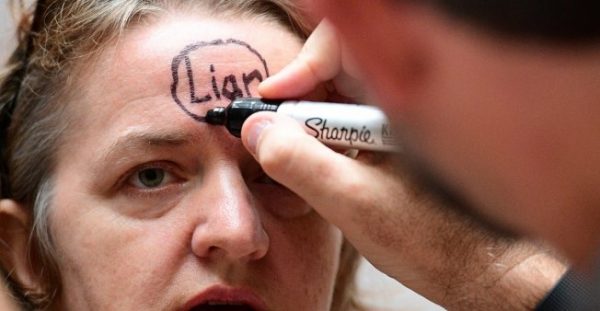 Jim Watson, AFP | An anti-Kavanaugh protester gets her face painted with the word “liar” on Capitol Hill on October 05, 2018.
Share:

A year after sexual harassment allegations against movie mogul Harvey Weinstein spurred the #MeToo movement, attitudes about accusations of sexual violence in the US are starkly divided. A new poll shows that opinions break along political lines.

Nowhere is that split more baldly evident than in the public reaction Christine Blasey Ford’s accusations of sexual assault against Supreme Court nominee Brett Kavanaugh. While a surveyconducted after the two testified before the Senate Judiciary Committe showed that 45 percent of Americans believed Ford and only 33 percent think Kavanaugh’s version of events is the truth, when those numbers are broken down according to political affiliation, the picture looks very different.

Viewed through the lens of party politics, opinion on that matter is as bifurcated as it is on virtually all social and political issues these days: 76 percent of Democrats surveyed said they think Ford is telling the truth, and 76 percent of Republicans said they believe Kavanaugh.

Perhaps unsurprisingly, there is a difference of view between genders. Men are almost evenly divided on whom they believe is being truthful, with 39 percent of them coming down for Kavanaugh and 37 for Ford, while the majority of women 52 percent believe Ford, versus the 27 percent whom are on Kavanaugh’s side.

While these numbers clearly reflect that Republicans have largely refrained from embracing #MeToo, feminist leaders say that the movement has had a significant impact nevertheless.

“Women are finally speaking their truth to power,” National Organization for Women President Toni Van Pelt said in a telephone interview as she walked to an anti-Kavanaugh protest at the Supreme Court on Thursday. “These stories are being told, and they’re being told publicly.”

“Certainly the #MeToo movement has changed the tenor of the conversation,” said Jean Sinzdak, Associate Director of the Center for American Women and Politics at Rutgers University. “This moment … is defined by women’s frustration and anger with their treatment by men in power.”

After a year of allegations against a raft of powerful men, the public overall looks more likely to believe the credibility of an accuser. Back in 1991, after Anita Hill testified that she had been sexually harassed by then-Supreme Court nominee Clarence Thomas, 58 percent of people surveyed said that they found Thomas the more credible of the two, whereas only 24 percent thought Hill was. Women were not much more likely to believe Hill than were men 26 percent of women, versus 22 percent of men.

While the two nominations are separated by nearly three decades, Van Pelt thinks the difference in outlook is down to #MeToo. “The movement [in attitude] has just happened in the last year,” she said.

At least one thing hasn’t changed much in the intervening 27 years: The percentage of people who think that being guilty of sexual harassment should kill a Supreme Court nomination. In 1991 that number was 67 percent, and today it is 69 percent, according to the Elections Research Center at the University of Wisconsin-Madison.

Then, like now, opinion cleaved along party lines although the margins were far narrower. Then, 69 percent of Republicans believed Thomas versus 46 percent of Democrats. “Part of the difference in terms of culture is that things are more hyper-partisan and polarized than they ever were before,” Sinzdak said.

The issue of sexual harassment is no exception. While Trump’s election galvanized women on the left, resulting in the January 21, 2017 Women’s March the largest single demonstration in American history and certainly helping fan the anger that fueled #MeToo.

But, as the polling shows, passions about Kavanaugh and #MeToo in general run just as high on the other end of the political spectrum, fed, many say, by some of the same anxieties that propelled Trump into office in the first place feeling abandoned amid rapidly shifting cultural norms and a sense of victimhood.

“The practical reality is, jobs have dried up” in many parts of the country, Sinzdak said. The feeling among people living in those places is that “we, as a community, have been left behind and all of this is not fair,” she added. “We’re the forgotten ones.”

That same sense of unfair treatment is at play in attitudes about accusations of sexual harassment. Conversations on the political right often revolve around fears of men’s lives being ruined by unfair accusations a discourse that has been amplified mightily by Trump himself.

“It’s a very scary time for young men in America, when you can be guilty of something that you may not be guilty of,” Trump told reporters outside the White House on Tuesday. That evening he mocked Ford at a rally of supporters in Mississippi and said of Kavanaugh: “A man’s life is shattered.”

“This is textbook Republican right wing,” Van Pelt said. “They take a word and they turn the definition on its head. The victim in their mind becomes the perpetrator.”

If men are worried about being wrongly accused, what motivates women who oppose the #MeToo movement?

Van Pelt puts it down to privilege. Support for Kavanaugh is highest among white Republican women, whom Van Pelt says “have been privileged their entire lives and they depend on the men in their lives to maintain their privilege.”

If the men in these women’s lives lose their privilege, the women fall right along with them, Van Pelt said.

There’s another way in which Democratic women are differing from Republican women in their reaction to this cultural moment: They are running for office in record numbers. “We are likely to see gains in terms of the numbers of women serving in congress,” Sinzdak said. And while the unlikely best-case scenario would still only bring female congressional representation to 24 percent, any increase from the current 19 percent would be a step in the right direction for feminist activists.

As Van Pelt reminded, progress takes time. “I don’t think it’s going to change overnight, but we have a lot of hope,” she said.