Iran fires 6 missiles into Syria over Iraq. 2 fail after launch in Kermanshah 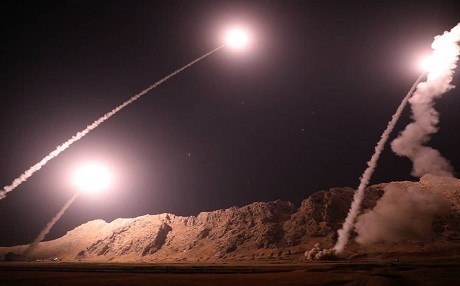 ERBIL, Kurdistan Region — Iran retaliated for the Ahvaz attack by firing six Qiam missiles from Kermanshah province over Iraq into Syria east of the Euphrates near Al Boukamal on Monday.

The Islamic Revolutionary Guard Corps (IRGC) released a statement on the strikes saying they were retaliation for the attack on its military parade in Ahvaz, Iran, on September 22 that killed “25 people and wounded 69.”

The agency said “a large number of terrorists were destroyed” including ISIS leaders “supported by the United States.” The United States has denied it had anything to do with the Ahvaz attack, which was reportedly conducted by the Arab al-Ahvaziya militant group. ISIS also claimed responsibility for the attack.
Two of the missiles reportedly failed shortly after launch landing in farmland. The others traveled roughly 570 kilometers over Iraq.

Two of the Qiam-1 Ballistic missiles failed seconds after their launch and crashed at Sarab-e Yavari village near city of #Kermanshah, however they didn’t kill any civilian & just destroyed two farms, but they proved that #IRGC‘s ballistic missiles are extremely unreliable. pic.twitter.com/ljP5Ddvu22

Kermanshah is a Kurdish province in Iran on the border with the Kurdistan Region of Iraq.

East of the Euphrates near Al Boukamal, the US-led international anti-ISIS coalition is conducting clearing operations with the Syrian Democratic Forces (SDF). The Iraqi military has at times supported the operation with air strikes.

For anyone wondering if the missiles had a message to the world: Iranian state media boasts that the missiles launched had the texts “Down with #USA”, “Down with #Israel” and “Down with Saudi Arabia” written on them. #Iran #Kurdistan #Rojhelat #IRGC pic.twitter.com/HhBcTBxqb8

“Iranian forces did conduct no notice strikes last night,” said Ryan, although he did not confirm the origin of the launch. 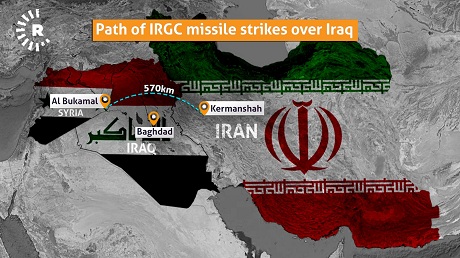 Sources described as reliable by the Syrian Observatory for Human Rights reported that “ground-to-ground” missiles targeted ISIS headquarters in the Hajin, just north of Al Boukamal.

The UK-based Observatory said there was no information regarding human casualties.

Washington and Moscow have an agreement on a de-confliction line that runs roughly the along the Euphrates from Deir ez-Zor to the border city of Al Boukamal that keeps Syria’s primary backers — Russia and Iran — from clashing with the coalition.
Agencies