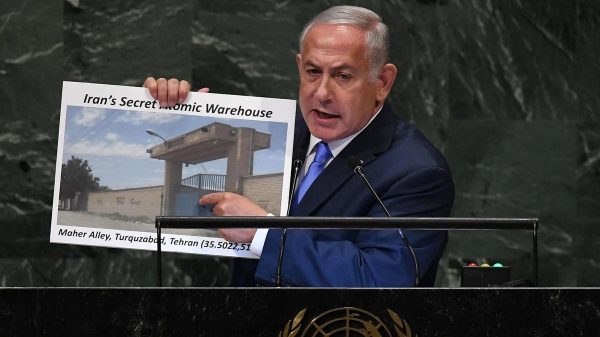 Israeli Prime Minister Benjamin Netanyahu on Thursday accused Iran of hiding nuclear-related material at a warehouse in Tehran, which he said proved it had not abandoned its nuclear weapons program.

In a speech at the U.N. General Assembly, Netanyahu used pictures and diagrams to show where some 15 kilograms (33 pounds) of radioactive material had been stored and called on the U.N.’s atomic agency to head to the locations immediately with Geiger counters.

“Today I am disclosing for the first time that Iran has another secret facility in Tehran, a secret atomic warehouse for storing massive amounts of equipment and materiel from Iran’s secret nuclear program,” Netanyahu said in a speech that was mostly aimed at Iran.

He did not specify what the material was or suggest that Iran was actively violating a 2015 nuclear deal with world powers, but his announcement is likely to bolster U.S. efforts to take a harder line against Iran.

“Since we raided the atomic archive, they’ve been busy cleaning out the atomic warehouse. Just last month they removed 15 kilograms of radioactive material. You know what they did with it?” he said. “They took it out and they spread it around Tehran in an effort to hide the evidence.”

Netanyahu in April unveiled what he said was archives that showed a secret Iranian nuclear weapons program ahead of the United States’ decision to pull out of the nuclear deal.

He said Iranian officials had started cleaning out the atomic warehouse, but still had a lot of work to do because there were some 15 shipping containers full of nuclear-related equipment and materials stored at the site.

“This site contained as much as 300 tonnes – 300 tonnes – of nuclear-related equipment and materiel,” he said.

Under the nuclear deal struck by Iran and six major powers – Britain, China, France, Germany, Russia and the United States – Tehran agreed to limit its nuclear program in return for relief from U.S. and other economic sanctions.

The International Atomic Agency (IAEA) has repeatedly said Tehran was abiding by its commitments to the deal. France, Britain, Germany, China and Russia have stayed in the pact, vowing to save it despite the restoration of U.S. sanctions on Iran.

“While the United States is confronting Iran with new sanctions, Europe and others are appeasing Iran by trying to help it bypass those new sanctions,” Netanyahu said.

Neither the IAEA nor Iran were immediately available for comment.

“In Lebanon, Iran is directing Hezbollah to build secret sites to convert inaccurate projectiles into precision-guided missiles, that can target deep inside Israel within an accuracy of 10 meters (yards),” he said.