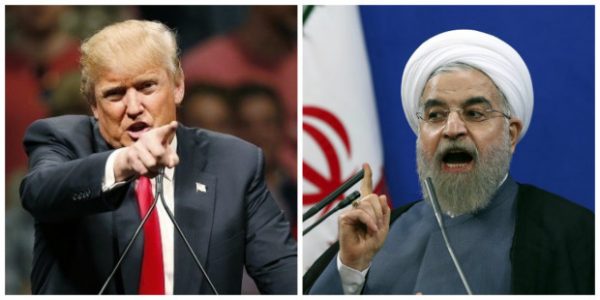 U.S. President Donald Trump warned last February Iran President Hassan Rouhani to “better be careful” after Rouhani was quoted as saying that anyone who speaks to Iranians with threats would regret it.
Share:

U.S. President Donald Trump on Tuesday said he would not meet Iranian President Hassan Rouhani as world leaders gathered in New York but signaled he was open to a future meeting, despite ongoing tensions over Tehran’s nuclear deal.

Both countries’ presidents were due to attend the U.N. General Assembly in New York where Trump is scheduled to address the gathering at 10:15 a.m. (1415 GMT).

Foes for decades, Washington and Tehran have been increasingly at odds since May, when the Republican U.S. president pulled out of the 2015 international nuclear deal with Iran and announced sanctions against the OPEC member.

The accord, negotiated under Democratic U.S. President Barack Obama, lifted most international sanctions against Tehran in exchange for Iran curbing its nuclear program.

Over the summer, Trump had said he would meet with Rouhani without preconditions to negotiate a new deal, an offer reiterated on Sunday by U.S. Secretary of State Mike Pompeo and extended to Iran’s supreme leader, Ayatollah Khamenei.

Rouhani said on Monday Tehran would not talk to Trump until the United States returned to the 2015 deal.. The top adviser to Khamenei, Ali Akbar Velayati, rejected the U.S. offer on Tuesday, saying “Trump’s and Pompeo’s dream would never come to reality,” the IRNA news agency said.

“Despite requests, I have no plans to meet Iranian President Hassan Rouhani. Maybe someday in the future. I am sure he is an absolutely lovely man,” Trump wrote in a post on Twitter.

Alireza Miryousefi, spokesman for Iran’s U.N. mission, told Reuters that Iran has not requested a meeting with Trump.

Some Iranian insiders have said any talks between Rouhani and Trump would effectively kill the existing deal.

Quashing the current pact would come at a political cost for the Iranian president, who championed the deal with the supreme leader’s guarded backing and who could lose support from European allies.

Rouhani is also under increasing pressure from his country’s hardliners, including Iran’s elite Revolutionary Guards, which have kept up the anti-American rhetoric ahead of the U.N. session.

Iran curbed its nuclear activities in exchange for sanctions relief in the 2015 nuclear accord.

Trump pulled out, saying the agreement did not go far enough. His administration is pushing allies to cut imports of Iranian oil to zero as Washington prepares to restore sanctions on Iran’s oil sales in November.

The remaining countries in the deal, which see it as the best chance to stop Iran from developing a nuclear bomb, on Monday agreed to keep working to maintain trade with Tehran.

German Foreign Minister Heiko Maas, following a meeting on Monday with Britain, China, France, Germany, Russia and Iran in New York, warned that the U.S. strategy of applying maximum pressure on Tehran and going it alone could risk a regional escalation.