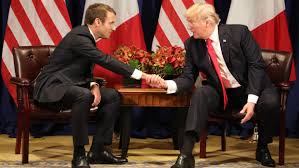 President Donald Trump didn’t bring up any new areas of contention in his Monday meeting with French President Emmanuel Macron, and the two found areas of agreement over Iran and Syria, French officials said.

Trump and Macron “discussed a wide range of international issues, including the situation in Syria, countering threats posed by Iran, and promoting fair terms of trade between the United States and the European Union,” the White House said in a statement. The meeting lasted about an hour.
French officials told reporters that Trump asked Macron for his views, listened to the answers, and didn’t seek confrontation. The official spoke on condition that their names not be used because only the president himself can be quoted on official visits.

Macron and Trump shared the same concerns about Iran’s ballistic missile program and its regional meddling, the officials said, but Trump insisted that the U.S.’s policy of imposing sanctions was bearing fruit by weakening Iran’s economy and it was therefore too early to consider talks. On Syria, they agreed to work with Turkey to save civilian lives in the Idlib area. On trade, Trump said Europe had been unfair to the U.S., and Macron replied that the U.S. has high tariffs and barriers of its own, but they agreed both sides should keep talking.

Macron has established a closer working relationship with Trump than have the leaders of Germany and Britain, though the two have had fierce clashes over Iran, trade, and above all on an issue they didn’t even discuss on Monday – climate.

Trump said he enjoyed a July visit to Paris and before Monday’s meeting he recalled for reporters his dinner with Macron at the Eiffel Tower during that visit. The two leaders later discussed Trump’s planned Nov. 11 trip to Paris to celebrate the 100th anniversary of the World War I armistice.