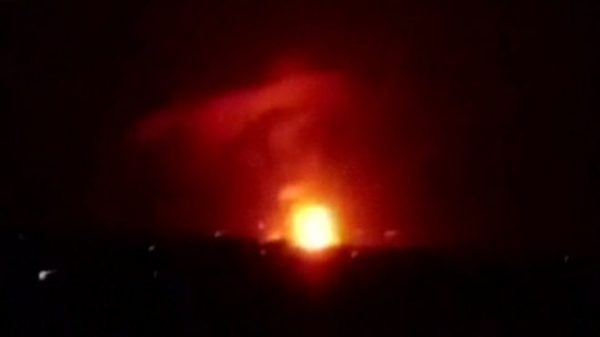 There are conflicting reports about the cause of a series of blasts at a military airport near Damascus , Syria on Sunday . The Syrian regime has denied reports that they were caused by Israeli air strikes, state media say.
Share:

Syria has denied reports that a series of blasts at a military airport near Damascus on Sunday were from Israeli air strikes, state media say.

The loud blasts, reported at the Mezzeh airport, were caused by an explosion at a munitions dump, Sana news agency said, citing Syrian military sources.

The incident was the result of an electrical fault, the agency added.

Israel has launched air strikes against Syria in the past and was accused of targeting Mezzeh airport last year.

But a Syrian military source later rejected the claim, stating that the base was not the target of “Israeli aggression”, according to state-run Sana.

In May, Israel said it had attacked Iranian military infrastructure in Syria following what it said was an Iranian rocket attack on Israeli-held territory.

The following month, Israel said it had shot down a Syrian warplane which entered its airspace – a rare incident between the two foes.

In January last year, Syrian state media quoted the army as saying that several rockets had landed at the Mezzeh airport compound, accusing Israel of bombarding the area.