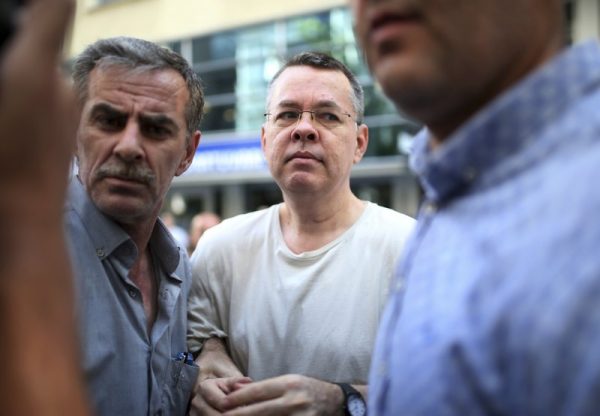 In this July 25, 2018 photo, Andrew Craig Brunson, an evangelical pastor from Black Mountain, North Carolina, arrives at his house in Izmir, Turkey. An American pastor who had been jailed in Turkey for more than one and a half years on terror and espionage charges was released Wednesday and will be put under house arrest as his trial continues. Vice President Mike Pence said Thursday that if Turkey does not take immediate action to free Brunson, “the United States of America will impose severe economic sanctions on Turkey,” in comments at the close of a three-day conference on religious freedom. (AP Photo/Emre Tazegul)
Share:

An American Christian pastor standing trial in Turkey on terrorism charges has appealed again to a Turkish court to release him from house arrest and lift his travel ban, his lawyer told Reuters on Tuesday.

Relations between the two NATO allies have spiraled into a full-blown crisis over the trial of Christian pastor Andrew Brunson, who was held for 21 months in a Turkish prison until his transfer to house arrest last month – a move Washington dismissed as insufficient.

Brunson, who has been living in Turkey for more than two decades, was accused of helping supporters of Fethullah Gulen, the U.S.-based cleric who Turkish authorities say masterminded the 2016 coup attempt against President Tayyip Erdogan.

“The court should prevent unlawful political interventions by lifting judicial control provisions on the defendant,” the document said.

Turkish lira plunged on concerns over the deepening rift between Washington and Ankara, hitting a record low of 7.24 against U.S. dollar and weakening some 45 percent so far this year.

The United States imposed sanctions on two Turkish ministers and doubled customs tariffs on Turkish aluminum and steel imports after Brunson was placed in house arrest.

Brunson’s lawyer, Ismail Cem Halavurt, said the court had up to seven days to decide. Brunson, who faces up to 35 years in jail if found guilty, denies the charges.

Brunson’s next hearing as part of the trial is scheduled for October 12.