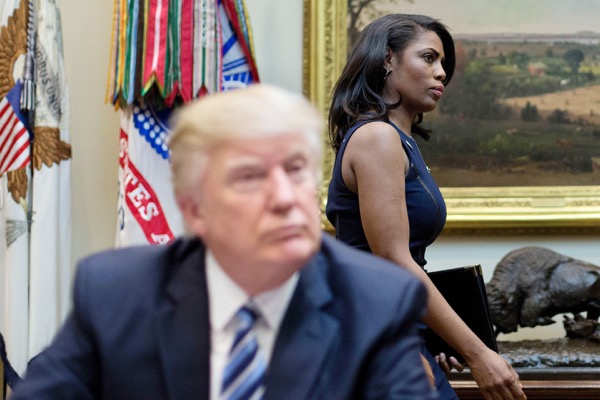 Omarosa Manigault Newman has hit all of the morning talk shows, released scandalous tapes, and made some serious accusations against the United States president she worked for over an 11-month period and has known for 15 years.
Share:

Omarosa Manigault Newman says she has “escaped from the cult of Trumpworld.” In her new book, the former White House aide and reality TV star is unleashing fire and fury on her onetime boss and mentor, Donald Trump.

Gallery Books, publisher of “Unhinged: An Insider’s Account of the Trump White House,” promised an “explosive, jaw-dropping account.” We’ve read the book (on sale Aug. 14),  which no doubt will provoke a tweet-storm of pushback from the White House.

(On Friday, White House Press Secretary Sarah Sanders dismissed the book as “riddled with lies and false accusations. It’s sad that a disgruntled former White House employee is trying to profit off these false attacks, and even worse that the media would now give her a platform, after not taking her seriously when she had only positive things to say about the president during her time in the administration.”)

Here are the main takeaways from Omarosa – who, despite her villainous reputation from NBC’s “The Apprentice,” where she first met Trump in 2003, portrays herself as a voice of reason and sanity in chaotic Trumpworld:

► She now believes the president to whom she was loyal for 14 years is “a racist, a bigot and a misogynist.” His biggest personality flaw is a complete lack of empathy for others, she writes.

► She believes the president is in “mental decline” and physically unwell.

► She believes Vice President Mike Pence (a “Stepford Veep”) and his team “are simply biding their time until Trump is impeached or resigns.”

► She believes a deeply unhappy first lady Melania Trump “is counting every minute until (her husband) is out of office and she can divorce him.”

She didn’t leave the White House “kicking and screaming”

Omarosa, whose job was outreach to black colleges and universities and working on racial disparities in the military justice system, disputes reports that she had a noisy meltdown when she was booted from the administration by Chief of Staff John Kelly, without Trump’s knowledge.

Her theory on why she was summoned on Dec. 12, 2017, by the retired general (depicted as a control freak who isolated Trump by locking out the president’s friends and confidantes): She was trying to verify the existence of purported “Apprentice” tapes that producer Bill Pruitt claimed captured Trump using the N-word and other slurs. (On the first season, she wondered if Trump had used the word to defame her at the time. She says multiple sources confirmed the tapes to her, but in the book, she never says she has heard them herself. On Friday, she told NPR she has heard them, contradicting her book.)

Omarosa said she already had “one foot” out the White House door because of the “mishandling” of the riots in Charlottesville, Virginia, and other Trump acts she considered racist, such as his “insensitive” condolence call to the widow of a soldier killed in Niger. She also thinks Trump “hated” President Barack Obama “because Obama was black” and says that one day, when she was making a case for abolitionist Harriet Tubman, Trump said: “You want me to put that face on the $20 bill?”

She says Kelly told her she had to leave because of “serious integrity violations,” which she denies. He said he wanted it to be a “friendly departure.” Had she been in the military, he said, she would have warranted a “court-martial.”

Trump, Omarosa says, has changed. “The Donald Trump of 2003 was as smart and as shrewd as he claimed to be,” she writes.

Donald Trump the president rambles, repeats himself and often speaks “gibberish.” He is given to “rages” when something upsets him. “I seriously began to suspect the president was delusional or had a mental condition, that made him forget from one day to the next,” she writes.

She cites one example of what she describes as Trump “rambling incoherently, speaking in random fragments (and) veering from thought to thought,” and says it’s a “snippet” based on the “best of my recollection.”

“Hey, I’m going to meet about, you know what? This guy’s a good guy. China, the people, look. China is getting us. These guys are no good. But the wall, the wall.”

She claims the “street-smart” president is “just this side of functionally literate,” says he is “spoon-fed” talking points about legislation he doesn’t read and “has only a surface-level understanding of the content he’s signing into law.”

She believes Trump’s “terrible health habits have caught up with him” (she calls him “obese” and says he has a junk-food-only diet, which is no secret) and wonders if it’s possible his “Diet Coke habit” could have led to a “stroke” or “dementia.” She says she tried to express her concerns about Trump to family members and medical staff, only to be brushed off.

Trump’s obsession with his daughter

Several of the most cringe-inducing passages in “Unhinged” depict Trump’s seemingly sexualized relationship with his daughter, Ivanka. “As long as I’d known Trump, I’d observed the way he hugs, touches, and kisses Ivanka; the way she calls him Daddy. … I believe he covets his daughter.” And as for Ivanka, “I believe she exploits his fixation with her to get her way.”

Omarosa recounts an occasion during the campaign when she was at a meeting with Trump and a “few other (unnamed) people” and writes:

“Ivanka came into the room wearing a fitted skirt. The entire meeting had to stop so (Trump) could gush about her body. ‘You look great! I like the way that skirt fits. Doesn’t Ivanka look great?’ He insisted we all agree that his daughter’s tight skirt was very flattering. I thought, Why don’t the two of you just cut it out? It appeared to me that Ivanka had gotten so used to his touching her in ways that made others cringe and either didn’t notice it anymore or purposefully allowed it to happen … “

On the other hand, Omarosa observed Trump belittling eldest son Don Jr. and writes that “Don Jr. was clearly terrified of his father.”

What does the enigmatic first lady really think of her husband?

Omarosa recalls events over the years where Melania Trump stayed behind and Trump “behaved like a dog off a leash. … Only Melania knows the bargain she made in her own mind to tolerate her husband’s behavior.”

Melania Trump did want her husband to win the presidency, according to Omarosa. “He had all the power, and she had none. That would change when she became First Lady.”

At the White House, Trump and his wife often aren’t on speaking terms, she writes. And she believes the first lady’s “style rebellions” – including the Zara jacket that screamed “I REALLY DON’T CARE, DO U?” and set off intense speculation – are directed at Trump.

“One person who knows better than anyone just how broken and flawed Donald Trump is? Melania. She’s been trying to tell the world all this time. … I believe Melania uses style to punish her husband.”

Offers of a new job, for silence

Omarosa says that the day after she left the White House, Trump called her and claimed he did not know Kelly was sending her packing. She also got supportive calls, she says, from Ivanka and her husband, Jared Kushner, and Trump’s son Eric and his wife, Lara. Lara offered her a job on Trump’s 2020 re-election campaign, with a caveat.

“Within twenty-four hours, Lara sent me a contract to work on the 2020 campaign for $15,000 per month. …The (non-disclosure agreement) attached to the email was as harsh and restrictive as any I’d seen in all my years of television. It said that I was forbidden from ever talking about the entire Trump family or the entire Pence family, to anyone in the universe, for all of eternity.”

She declined. “I was done with Trumpworld.” And free to write “Unhinged.”