Airline employee steals a plane from Seattle airport and crashes 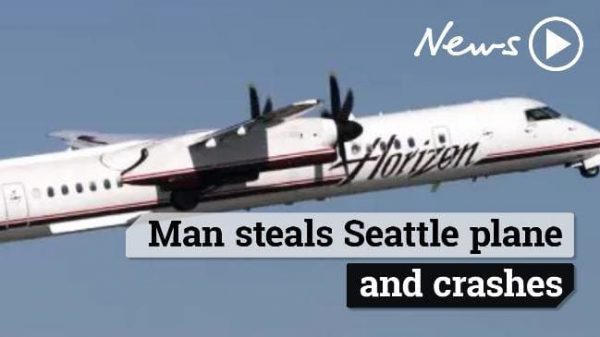 An airline employee stole an empty plane from the Seattle-Tacoma International Airport and flew it for an hour with military jets pursuing him before crashing in a wooded area 40 miles away.

The 76-seater aircraft took off without authorization Friday around 8 p.m. local time with a Horizon Air employee at the controls, airport officials tweeted.
The unidentified 29-year-old ground service agent was pronounced dead after the crash, Pierce County Sheriff Paul Pastor said.
Authorities initially identified the man as a mechanic but have since then said he was a ground service agent. As a ground service agent, employees work directing aircraft for takeoff, gate approach and de-icing planes.
“Our hearts are with the families of the individual aboard as well as all of our Alaska Air and Horizon Air employees,” said Constance von Muehlen, the airline’s chief operating officer.
The regional airline is based in the Seattle-Tacoma airport and it’s owned by the Alaska Air Group.
The incident was not considered terrorism, the FBI’s Seattle office tweeted.
The employee “was doing stunts in air or lack of flying skills caused crash into Island,” sheriff’s spokesman Ed Troyer tweeted.

Within minutes of the plane’s takeoff, the military scrambled two F-15 jets from Portland to follow the plane authorities said. They pursued the aircraft before it went down on Ketron Island between Tacoma and Olympia.
“Pilots kept plane out of harms way and people on ground safe,” the sheriff’s office tweeted. It said the jets were not involved in the crash.
In several tweets, Washington Gov. Jay Inslee thanked the fighter pilots who were “ready to do whatever was needed to protect us.”
“I want to thank the Air National Guard from Washington and Oregon for scrambling jets to keep Washingtonians safe. Those pilots are trained for moments like tonight and showed they are ready and capable,” he wrote.
Witnesses described the surreal scene after the plane left the airport. John Waldron was walking along a trail near the bay when he noticed the two military jets following a plane that appeared to be doing acrobatics.
“I thought they were practicing for an air show,” he said.
After the plane approached Ketron Island, Waldron saw a thick column of smoke followed by a loud explosion.
“Everyone was literally frozen in place muttering about what possibly happened,” he said.
Kethleen Reichel said she watched the planes pass by for about two minutes.
“My husband and I are recently former Boeing employees and we were wondering why a jet was near the passenger airplane,” she said. “We heard the jet because our windows were down while we were waiting in the ferry line to go to Anderson Island which is adjacent to Ketron Island.”

Hear audio from before plane crashed 01:12
In audio recordings, air traffic controllers could be heard trying to guide the man to land the plane.
“Congratulations, you did that, now let’s try to land that airplane safely and not hurt anybody on the ground,” an air traffic controller said.
The man responded: “Awwww-right… dammit.. I don’t know man! I don’t know! I don’t want to. I was kinda hoping that was gonna be it. Ya know?”
The exchange happened during the flight but the timing of the conversation is unclear.

Airport was briefly shut down

The plane was taken from a maintenance position and was not scheduled for a passenger flight, said Gary Beck, the airline’s president and chief executive officer.
It crashed about an hour later after it was stolen, and did not hit any ground structures.
Brad Tilden, the chief executive officer of Alaska Air Group — the airline’s parent company — said several federal agencies are investigating the incident.
“We’re working to find out everything we possibly can about what happened, working with the Federal Aviation Administration, the Federal Bureau of Investigation, and the National Transportation Safety Board. We are giving those investigators our full support and cooperation,” Tilden said in a statement.
Normal operations at the airport were interrupted briefly but have resumed, the airport said.
The plane was a Q400, a Bombardier turboprop plane. The airline has about 40 Q400s in its fleet.
CNN
Share:
Share Tweet Pin It +1
This error message is only visible to WordPress admins