Trump wants to police the Space too. Wants US to create military ‘Space Force’ by 2020 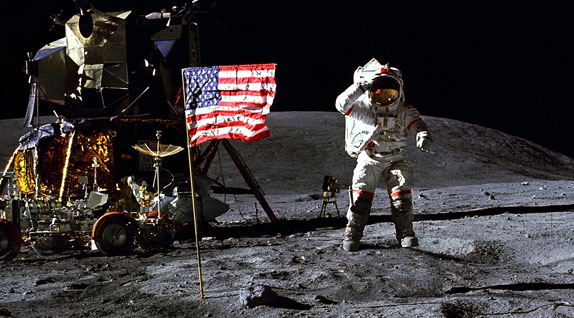 Apolo 11 is shown with US flag and astronaut Neil Armstrong wnen they landed on July 16, 1969 on the moon. Our world has gotten smaller, crowded, with no more lush, uncharted regions to discover, no more fertile, uninhabited lands to explore and conquer. So, naturally, man has set his sights on the one realm that has eluded him for millennia: SPACE. US president Donald Trump wants US to create military ‘Space Force’ by 2020
Share:

The Trump administration on Thursday announced an ambitious plan to usher in a new “Space Force” as the sixth branch of the military by 2020, but the proposal was scorned by opponents and may struggle to get liftoff in a divided Congress.

Trump has strongly championed the idea of creating a space-focused military service with the same stature as the Air Force and the Army, turning his dreams of a “Space Force” into a rallying cry for supporters at political events.

His 2020 reelection campaign sent a fundraising email on Thursday asking supporters to vote on their favorite Space Force logo for future Trump campaign merchandise, offering a choice of six.

U.S. Vice President Mike Pence, in an address at the Pentagon, described the Space Force as “an idea whose time has come.”

“America will always seek peace in space, as on the Earth. But history proves that peace only comes through strength, and in the realm of outer space, the United States Space Force will be that strength in the years ahead,” Pence said.

He added that Congress must now act to establish and fund the department. Trump tweeted: “Space Force all the way!” The Space Force would be responsible for a range of crucial space-based U.S. military capabilities, which include everything from satellites enabling the Global Positioning System (GPS) to sensors that help track missile launches.

But critics view its creation as an unnecessary and expensive bureaucratic endeavor, a vanity project that simply strips away work already being done effectively by services like the Air Force.

Democratic Senator Brian Schatz, who is on the Defense Appropriations subcommittee, said the Space Force was a “dumb idea.”

“Although ‘Space Force’ won’t happen, it’s dangerous to have a leader who cannot be talked out of crazy ideas,” Schatz said on Twitter.

Maybe, just maybe, we should make sure our people are not dying because they lack health insurance before we start spending billions to militarize outer space. #SpaceForce

However, although Pentagon leaders, including U.S. Defense Secretary Jim Mattis, once opposed the idea of a Space Force, they lined up on Thursday to offer their support.

A Pentagon report released on Thursday included interim steps toward the creation of such an organization.

A unified combatant command known as the U.S. Space Command would be formed by the end of 2018, according to a copy reviewed by Reuters.

In a nod to the Air Force’s current role, the Pentagon report recommended that the Space Command be led initially by the commander of Air Force Space Command, who would be dual-hatted.
One of the arguments in favor of devoting more resources to a Space Force or Space Command is that American rivals like Russia and China appear increasingly ready to strike U.S. space-based capabilities in the event of a conflict.

“It is becoming a contested war fighting domain and we have to adapt to that reality,” Mattis said.

The United States is a member of the 1967 Outer Space Treaty, which bars the stationing of weapons of mass destruction in space and only allows for the use of the moon and other celestial bodies for peaceful purposes.

Former astronaut and retired U.S. Navy Captain Mark Kelly on Thursday said that while Pence was right about the threats in outer space, the military was already handling them.

“There is a threat out there but it’s being handled by the U.S. Air Force today. (It) doesn’t make sense to build a whole other level of bureaucracy in an incredibly bureaucratic Department of Defense,” Kelly told MSNBC.