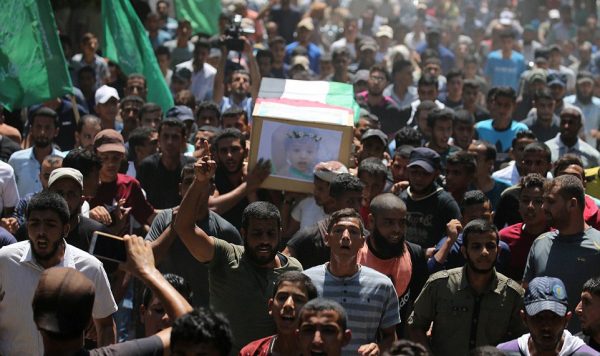 Israeli aircraft struck more than 150 targets in Gaza on Wednesday night and early Thursday, and Palestinian militants fired scores of rockets deep into Israel before the fighting appeared to lessen late Thursday.

After the long-range Palestinian missile attack, the first of its kind since a 2014 war, Israeli air strikes resumed on Thursday afternoon, flattening a multi-storey building that the Israeli military described as a Hamas headquarters.

A pregnant Palestinian woman and her 18-month-old child were killed in the Israeli attacks overnight, as was a Hamas militant, local medical officials said. Hundreds of people took part in the funeral for the woman and child on Thursday.

The Israeli military said seven people were wounded by Palestinian rockets and mortars that hit southern Israel across the border.

Israel has fought three wars in the past decade with Hamas, the Islamist group that controls the Gaza strip. A surge in cross border rocket and air strikes in recent weeks have prompted the United Nations and Egypt to try to broker a truce to prevent another one.

The violence decreased late Thursday, with two Palestinian officials telling Reuters that Israel and Hamas had agreed to a truce.

There was however no Israeli confirmation of an agreement.

Israeli Prime Minister Benjamin Netanyahu convened his security cabinet late into the night on Thursday. A statement issued by his office said the forum instructed the military to “keep acting with force against the terrorists”.

Ambulance sirens echoed through the night in Gaza, where families huddled at home as powerful explosions thundered through the narrow strip. Across the border rocket warning sirens sounded almost non-stop from sunset on Wednesday in Israeli towns and villages where residents sheltered in bunkers.

The Israeli military said its aircraft had struck more than 150 Hamas targets overnight, while more than 180 Palestinian rockets and mortars hit southern Israel.

For the first time since the 2014 war, Palestinian militants on Thursday fired a long-range missile deep into Israeli territory. Twenty-five miles from the border, air raid sirens rang out in Israel’s main southern city Beersheba.

Israeli Army Radio said militants had fired a Grad missile capable of reaching Israel’s heartland. Israeli police said they found its remnants in an open area on the outskirts of the city of 200,000 people and that no one was hurt.

Israel responded by hitting the multi-storey building, first with small bombs apparently so that people would evacuate, then flattening it to the ground with a huge blast that shook the city and raised clouds of dust and smoke.

Residents said the building had served mainly as a cultural centre. Local health officials said 18 bystanders were wounded outside of the building by the blast. Hamas denied using the facility.

US ‘concerned’ but says Israel has right to defend itself

Israel captured Gaza in a 1967 war but withdrew in 2005, while holding onto most of the separate West Bank, where Palestinians have limited self-rule. For more than a decade Gaza has been controlled by Hamas under an Israeli-Egyptian blockade that has collapsed its economy, creating what the World Bank has described as a humanitarian crisis with shortages of water, electricity and medicine.

Israel says it has no choice but to enforce its blockade to defend itself against Hamas, which calls for Israel’s destruction and has used Gaza as a base for missile attacks.

Yuval Steinitz, a member of Netanyahu’s security cabinet, told Israel Radio earlier that Israel was “not eager for war” but would make no concessions to Hamas.

Meanwhile a US State Department spokeswoman said Washington was monitoring developments in Gaza and believes the situation was very concerning. But, she insisted, Israel has the right to defend itself.

“Overall, we condemn the launching of missile attacks into Israel and call for an end to the destructive violence,” said State Department spokeswoman Heather Nauert.