Apple could be used as a ‘bargaining chip’ by China in trade war with US, its media warns 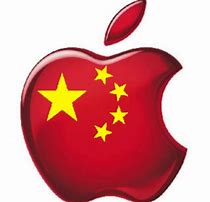 Apple has benefited from cheap labor and a strong supply chain in China and needs to share more of its profit with the Chinese people or face “anger and nationalist sentiment” amid the ongoing trade war, an article in the state-backed People’s Daily warned Tuesday. The article originally appeared in another state-backed publication, Global Times, last week.

The opinion piece highlights how Apple made $9.6 billion in revenues in China in the June quarter, which helped the U.S. giant to recently hit a $1 trillion valuation.

But the continuing trade war between the U.S. and China could leave Apple and other U.S. firms vulnerable as “bargaining chips” for Beijing, according to the article.

“The eye-catching success achieved in the Chinese market may provoke nationalist sentiment if U.S. President Donald Trump’srecently adopted protectionist measures hit Chinese companies hard,” the People’s Daily said.
“China is by far the most important overseas market for the U.S.-based Apple, leaving it exposed if Chinese people make it a target of anger and nationalist sentiment. China doesn’t want to close its doors to Apple despite the trade conflict, but if the U.S. company wants to earn good money in China, its needs to share its development dividends with the Chinese people.”

It’s unclear how the publication thinks Apple should share its profits with Chinese citizens.

Last week, China said it was ready to retaliate with tariffs on around $60 billion of U.S. goods, just days after the U.S. administration revealed that Trump had spoken with U.S. Trade Representative Robert Lighthizer and asked him to consider increasing the proposed levies on $200 billion of Chinese goods up to 25 percent,from 10 percent.

So far, Apple has been broadly insulated from the trade war. Trump reportedly told Apple CEO Tim Cook in June that iPhones assembled in China would be spared from levies.

But People’s Daily took issue with the economics of the iPhone. The article claimed that Chinese companies in Apple’s supply chain only get 1.8 percent of total profits created by the flagship device. People’s Daily did not cite where it got this figure from.

Ultimately, Chinese state media argued that U.S. companies could begin to enter the firing line in the conflict between the world’s two largest economies.

“The trade conflict initiated by the Trump administration reminds China to re-examine China-U.S. trade,” People’s Daily wrote. “It seems U.S. companies doing business in China are the biggest winners from China-U.S. trade. The Chinese market is vital for many top U.S. brands, giving Beijing more leeway to play hardball in the trade conflict.”