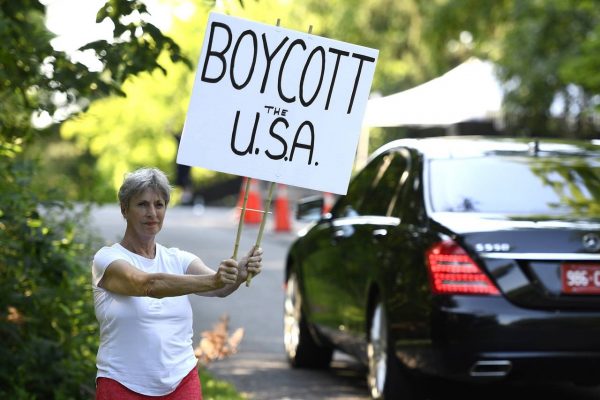 A woman greeting guests arriving at the official residence of the U.S. ambassador to Canada for Fourth of July celebrations in Ottawa on July 4. PHOTO: JUSTIN TANG/THE CANADIAN PRESS/ASSOCIATED PRESS
Share:

But the 58-year-old, who called the tariffs from Canada’s close trading partner a “slap in the face,” said he has in recent weeks put more Canadian products into his shopping cart.

Calgary resident Tracy Martell, meanwhile, replaced her Betty Crocker brownie mix with a homemade recipe and hasn’t visited the U.S. since shortly after President Trump’s inauguration. Beth Mouratidis, who lives in Barrie, Ontario, is trying out Strub’s pickles as a replacement for her longtime favorite, Bick’s.

“People sort of feel that we’re getting a raw deal from the U.S. and we have to stick up for ourselves,“ said Tom Legere, marketing manager for Ontario-based Kawartha Dairy Ltd., which has seen more interest in its ice cream recently. “And this is their way at the supermarket of trying to do so.”

The country is the U.S.’s top export market, taking a little more than 18% of all U.S. goods that are sold abroad. Sylvain Charlebois, a professor in food distribution and policy at Dalhousie University in Nova Scotia, estimates roughly 40% to 60% of food on Canada’s grocery shelves is from the U.S. Closely linked production chains make it tough to determine how much of any given item was produced domestically.

That has left would-be boycotters scratching their heads as they untangle how much of a given product was made or grown outside the country.

“I’ll swear up and down something is 100% Canadian,” said Ms. Mouratidis, who curates a Facebook list of Canadian household goods, food products and other items. Ms. Mouratidis said she was convinced Old Dutch chips were all-Canadian until she found out Old Dutch Foods Ltd. is a subsidiary. The parent company, Old Dutch Foods Inc., is based in Minnesota.

The snack food is still on Ms. Mouratidis’s list, she said, because the Canadian company makes its chips in Canada.

“I’m now becoming slightly radical about this,” said Ms. Quinn-Mullins, who skipped the fries and is still on the hunt for Canadian sweet potatoes.

A spokeswoman for McCain said its sweet potatoes are sourced from the U.S., where the climate is better for growing them.

Enthusiasts have occasionally drawn fire in their efforts to elevate Canadian brands. A social-media post promoting Kawartha Dairy over “American” Haagen-Dazs ice cream was criticized by a Facebook user who pointed out that Haagen-Dazs products sold in Canada are made at a Canadian plant.

Kawartha Dairy, which wasn’t involved in the original post, received more than a hundred emails and Facebook messages in recent weeks from Canadians asking where they could find the company’s ice cream.

Another product could be getting a boost from the “Buy Canadian” push: Hawkins Cheezies, a corn snack that looks like a denser and crunchier version of Cheetos that is made with Canadian cheddar. W.T. Hawkins Ltd., which makes the snack, said two large grocery-store chains recently increased their orders.

Others have found themselves in the crosshairs of Buy Canadian supporters. Kraft Heinz Co. has been a frequent target for Canadians since Heinz stopped producing ketchup in Ontario in 2014. A list circulating online recently that ranked consumers’ best options for Canadian products puts French’s ketchup ahead of Heinz because it is manufactured in Canada.

It is difficult to say whether the nascent boycott efforts are having an impact. Goods exports to Canada were up nearly 4% in June from the same month last year, according to the U.S. Census Bureau. However, they were down 1.2% when compared with the previous month on a seasonally adjusted basis.

One sector where the boycott efforts doesn’t seem to be working is travel. Overall cross-border car trips by Canadians were up 12.7% in June from the same month last year, according to Statistics Canada.