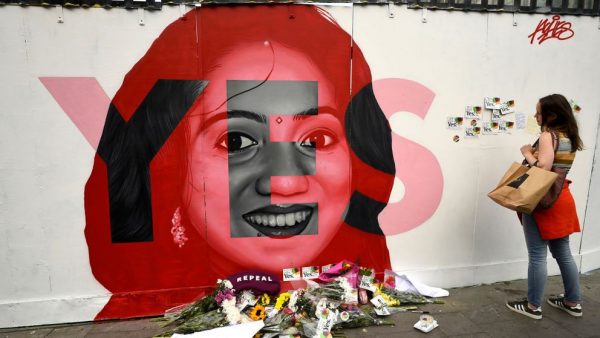 Savita Halappanavar’s image features on a Yes campaign mural in Dublin. Savita Halappanavar was a 31-year-old Indian dentist who died on 28 October 2012 at University Hospital Galway in Ireland due to the complications of a septic miscarriage at 17 weeks’ gestation.
Share:

DUBLIN – Ireland’s prime minister on Saturday hailed the culmination of “a quiet revolution” in what was once one of Europe’s most socially conservative countries after a landslide referendum vote to liberalize highly restrictive laws on abortion.

Voters in the once deeply Catholic nation backed the change by two-to-one, a far higher margin than any opinion poll in the run up to the vote had predicted, and allows the government to bring in legislation by the end of the year.

For decades, the law forced over 3,000 women to travel to Britain each year for terminations and “Yes” campaigners argued that with others now ordering pills illegally online, abortion was already a reality in Ireland.

The campaign was defined by women publicly sharing their painful experiences of leaving the country for procedures, a key reason why all but one of Ireland’s 40 constituencies voted “Yes”.

Prime Minister Leo Varadkar, who campaigned to repeal the laws, had called the vote a once-in-a-generation chance and voters responded by turning out in droves. A turnout of 64 percent was one of the highest for a referendum.

“Today is an historic day for Ireland. A quiet revolution has taken place,” Varadkar, who became Ireland’s first openly gay prime minister last year, said in a speech after the vote.

“Everyone deserves a second chance. This is Ireland’s second chance to treat everyone equally and with compassion and respect. We have voted to look reality in the eye and we did not blink.”

The outcome is a new milestone on a path of change for a country which only legalized divorce by a razor thin majority in 1995 before becoming the first in the world to adopt gay marriage by popular vote three years ago.

The once-mighty Catholic Church took a back seat throughout the campaign.

Anti-abortion activists conceded defeat early on Saturday as their opponents expressed astonishment at the scale of their victory. Lawmakers who campaigned for a “No” vote said they would not seek to block the government’s plans to allow abortions with no restriction up to 12 weeks into a pregnancy.

“What Irish voters did yesterday is a tragedy of historic proportions,” the Save The 8th group said. “However, a wrong does not become a right simply because a majority support it.”

Voters were asked to scrap the constitutional amendment, which gives an unborn child and its mother equal rights to life. The consequent prohibition on abortion was partly lifted in 2013 for cases where the mother’s life was in danger.

The country’s largest newspaper, the Irish Independent, described the result as “a massive moment in Ireland’s social history”.

Campaigners for change, wearing “Repeal” jumpers and “Yes” badges, gathered at count centers, many in tears and hugging each other. Others sang songs in the sunshine outside the main Dublin results center as they awaited the official result.

The large crowd cheered Varadkar as he took to the stage to thank them for “trusting women and respecting their choices”.

Reform in Ireland also raised the prospect that women in Northern Ireland, where abortion is still illegal, may start traveling south of the border.

“The outcome of the referendum is an extremely worrying development for the protection of the unborn child in Northern Ireland,” said Jim Wells, a member of Northern Ireland’s socially conservative Democratic Unionist Party.

No social issue had divided Ireland’s 4.8 million people as sharply as abortion, which was pushed up the political agenda by the death in 2012 of a 31-year-old Indian immigrant from a septic miscarriage after she was refused a termination.

Campaigners left flowers and candles at a large mural of the woman, Savita Halappanavar, in central Dublin. Her parents in India were quoted by the Irish Times newspaper as thanking their “brothers and sisters” in Ireland and requesting the new law be called “Savita’s law”.

Deputy Prime Minister Simon Coveney said he believed a middle ground of around 40 percent of voters had decided en masse to allow women and doctors rather than lawmakers and lawyers to decide whether a termination was justified.

“For him, it’s a different Ireland that we’re moving onto,” said Colm O’Riain, a 44-year-old teacher referring to his son Ruarai, born 14 weeks premature in November who was in his arms.

“It’s an Ireland that is more tolerant, more inclusive and where he can be whatever he wants without fear of recrimination.”

British Prime Minister Theresa May faces a showdown with ministers and lawmakers in her Conservative party after refusing to back reform of Northern Ireland’s highly restrictive abortion rules after neighboring Ireland’s vote to liberalize its laws.

The prime minister is facing calls from within her cabinet to scrap the strict rules on abortion in Northern Ireland and bring the law in line with the rest of the United Kingdom.

“A historic and great day for Ireland and a hopeful one for Northern Ireland,” Mordaunt said. “That hope must be met.”

A spokeswoman for May said on Sunday changing the rules should only be undertaken by a government in Northern Ireland, which has been without a devolved executive since January last year after a power-sharing agreement collapsed.

Northern Ireland has some of the most restrictive abortion laws in Europe with even rape and fatal fetal abnormality not considered legal grounds for a termination. And unlike other parts of the United Kingdom, abortions are banned apart from when the life or mental health of the mother is in danger.

More than 130 members of Britain’s parliament, including lawmakers in the ruling Conservative party, are prepared to back an amendment to a new domestic violence bill to allow abortions in Northern Ireland, the Sunday Times newspaper reported.

Northern Ireland’s elected assembly has the right to bring its abortion laws in line with the rest of Britain, but voted against doing so in February 2016 and the assembly has not sat since the devolved government collapsed in January 2017.