Berri says a new government should be formed within a month, as Hariri starts negotiations 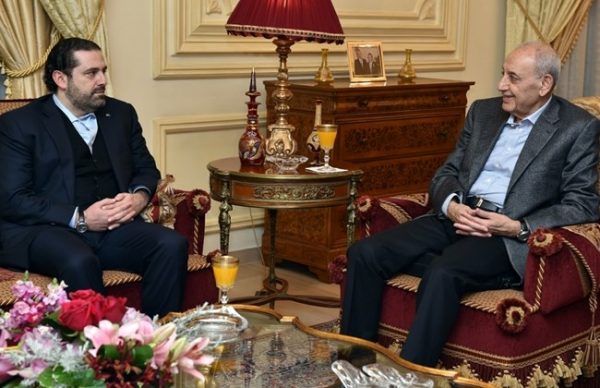 Lebanese Parliament Speaker Nabih Berri said a new coalition government should be formed within a month, according to comments reported on Monday, as Prime Minister-designate Saad al-Hariri launched difficult negotiations over the new cabinet.

“Nobody has an interest in delaying the birth of the government or putting complications in its way,” Berri told people who had visited him, the Hariri-owned newspaper Al-Mustaqbal reported.

Hariri, who will be prime minister for the third time, said last week all parties agreed that economic risks at home and growing dangers in the region meant a national unity government must be formed as quickly as possible.

The Iran-backed Shi’ite group Hezbollah aims to secure a bigger say in the next government than it had in the last one, after the heavily armed group and its allies made significant gains in a May 6 general election.

Lebanon’s dire economic situation and unsustainable debt levels are seen as top priorities for the next government. So too is the Syrian refugee crisis for a country where one in four people is a Syrian refugee.

The head of Hezbollah’s parliamentary bloc, Mohammed Raad, told reporters after meeting Hariri that his party had requested a “weighty ministry” in the new government.

Senior political sources have said Hezbollah is seeking at least one service-provision ministry and will have three instead of two ministries this time. The group has typically taken ministries of marginal importance.

Hezbollah, along with groups and individuals that support its possession of arms, won a majority in parliament’s 128 seats in the election, a reversal of Lebanon’s last legislative election, which returned an anti-Hezbollah majority in 2009.

The staunchly anti-Hezbollah Lebanese Forces party which was the top winner in the election ( almost doubled its number of seats from 8 to 15 )  is seeking more government ministries to reflect its gains in the election.

The FPM was founded by President Michel Aoun, and has been led by his son-in-law Gebran Bassil since 2015. The group has been politically allied to Hezbollah since 2006.

Bassil, foreign minister in the outgoing government, said the FPM’s share of cabinet posts should include either the ministry of finance or the interior, saying his party had been denied both since 2005.

Berri is insisting that the finance ministry remains with his Shi’ite Amal Movement. Hezbollah supports that demand, according to sources familiar with the group’s thinking.

The interior ministry was controlled by Hariri’s Future Movement in the outgoing government. Hariri lost more than a third of its seats in the election, many of them to Hezbollah allies.