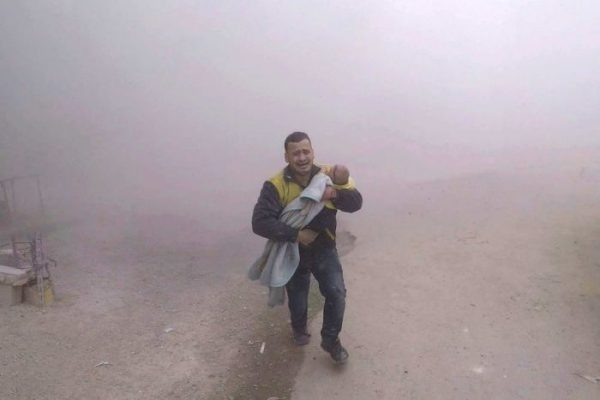 PHOTO: Those fleeing the conflict in Syria have been put at a distinct disadvantage by Law Number 10. (AP: Syrian Civil Defence White Helmets)
Share:

A harsh new property law implemented by the Syrian government effectively deprives thousands of people displaced by the ongoing conflict of their homes and lands and potentially destroys evidence of war crimes it has committed, Amnesty International said today.

Passed in 2012, Legislative Decree 66 allows the Syrian government to demolish informal settlement areas in Damascus and Damascus Countryside to convert them into urban development zones with residential blocks, markets and public spaces. Under the new regulations passed in Law 10 in 2018, once a development zone has been designated, the authorities must publicly notify home and land owners, who have only 30 days to assemble the necessary paperwork and claim their property.

With more than 11 million Syrians displaced, either within Syria or living as refugees in other countries, this is likely to be a near impossible feat for many of those affected. According to research by the Norwegian Refugee Council, barely one in five Syrian refugees have title deeds in their possession. Twenty-one percent said their documents had been destroyed.

“If enacted, this law could be used to implement a breathtakingly efficient feat of social engineering. Thousands of Syrians – mostly those in pro-opposition areas or who have sought refuge abroad – risk losing their homes because their documents are lost or destroyed. The law does nothing to guarantee the rights of refugees or displaced people who fled for their lives and fear persecution if they return to their homes,” said Diana Semaan, Amnesty International’s Syria researcher.

“This law is clearly open to abuse by a government which has shown ruthless determination to crush those it perceives to have been associated with its opponents. The government must suspend the urban development schemes until everyone, including those who have been forcibly displaced, have a genuine opportunity to meaningfully engage in the process. The aim must be facilitating the voluntary, safe and sustainable return of those displaced in the conflict.”

Amnesty International has established that Syrian refugees and others displaced by the conflict who return home to claim their property will be subject to “security clearance” by government agents. While it is not clear what this process will entail, in the current climate of insecurity and rampant human rights violations by security forces, this is likely to deter many people from trying to reclaim their homes and lands.

While the legislation provides some provisions that ensure the right of home owners in designated zones to apply for alternative housing and financial compensation, it falls far short of protecting the rights of people who had been living in informal settlements and whose residence is most likely not recorded in the land registry.

Women whose husbands or fathers have been killed or missing face serious obstacles in claiming their property as the deeds are often in the name of their male relatives. They might lack the required official civil documentation such as family record or proof of the whereabouts and fate of their male relatives that would allow women to act on the behalf of the rights holders.

Civilians whose homes have been destroyed or damaged and whose family members have been killed or injured in unlawful attacks receive no remedy or compensation. And in some cases, implementing the new property law could result in covering up evidence of war crimes.

In the case of Daraya, outside of Damascus, where Amnesty International has documented violations by the Syrian government including a prolonged siege and indiscriminate attacks using thousands of barrel bombs, and the ensuing forced displacement of those civilians who survived the siege, the bulldozing and rebuilding of the area raises deep concerns about the destruction of evidence of war crimes and crimes against humanity.

There are also no provisions to provide reparation to owners whose homes were looted by security forces in areas designated for redevelopment, including in the town of Daraya.

“Future investigations into crimes under international law could be seriously undermined as a result of these new regulations,” Diana Semaan said.

“The authorities must ensure everyone who has been arbitrarily or unlawfully deprived of housing, land or property has access to legal remedies including challenging decisions of the government before an independent and impartial body.”

“The authorities must provide full reparation to those whose homes have been unlawfully destroyed, appropriated or looted by security forces.”

In 2012, the Syrian government adopted Decree 66 which allowed the authorities to “redevelop areas of unauthorised housing and informal settlements” in the capital Damascus.

Law 10 is a nationwide expansion of Decree 66, which established two development zones in the Governorate of Damascus covering areas including Daraya, an area formerly besieged by the Syrian government which is now empty of inhabitants after government forces forcibly displaced the remaining 4,000 residents in 2016.

The conflict, which is in its seventh year, has led to more than 6 million people being displaced within Syria and 5 million Syrians becoming refugees.